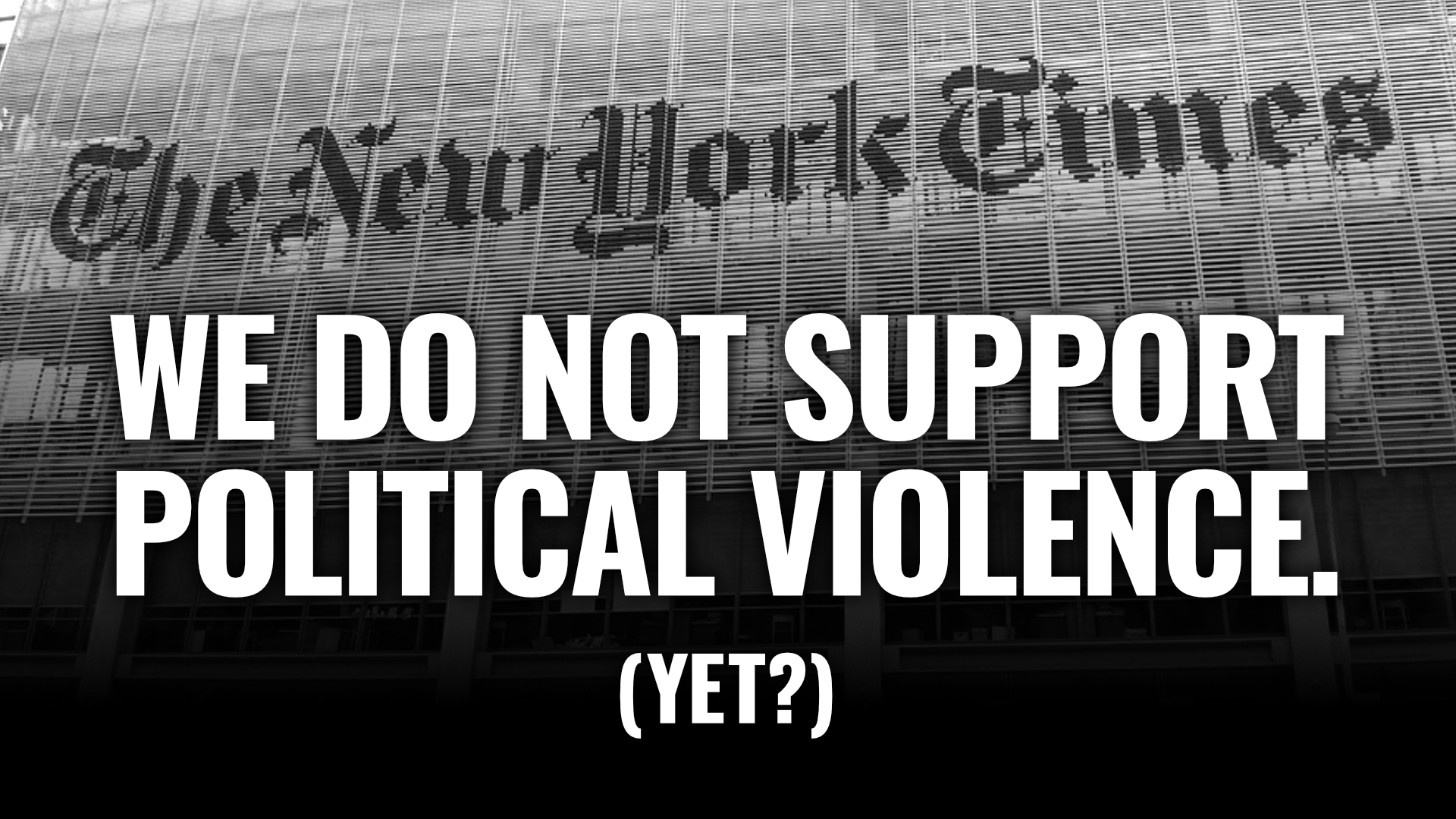 The New York Times editorial board published an op-ed saying that we must have no political violence in order for democracy to prevail.  The Texian Partisan agrees, so let’s put the Times on the record to see if they age well post-Texit.

As a Texan, I typically don’t much care what the New York Times editorial board thinks.  Every once in a while a blind hog finds an acorn, however.  In an op-ed published today, the Times reviews the threat that “political violence” represents to “democracy.”  Those of us in favor of Texit have been exceptionally clear that non-violent separation of Texas from the US by political means is our goal.  Just in case we weren’t clear enough, we’ve even posted about our opposition to “civil war.”

The folks at the Times are correct in being wary of those who would use violence to achieve political goals.  Being who they are, of course they frame the risk as “right wing” and fail to mention such things as riots over whose lives matter, but they’re not entirely wrong: violence isn’t the best way toward political change.  They trot out a liberal expert, who accidentally speaks the truth:

Any violence suppresses participation in democratic decision making, and it can negate the decisions that are made. “The damage that this violence itself and the conspiracies driving it are causing to our democracy are already substantial and are likely to produce significant democratic decline if not arrested soon,” Rachel Kleinfeld of the Carnegie Endowment for International Peace told the Jan. 6 committee.

The Times then goes on to announce a deep dive series into four areas they think we need to improve when it comes to the threat of political violence: organized paramilitary groups, the presence of extremists in law enforcement and the military, the global spread of extremist ideas and the growing number of G.O.P. politicians who are using the threat of political violence.  Since each of these is actually a symptom and not a cause, I suspect that the articles won’t be that useful.

Those of us in favor of Texit don’t condone violence at any level, neither bedroom hammers, baseball field rifles, destructive riots, or chaotic “rallies” that result in breached government buildings.  What the Times will fail to address is the complete dysfunction of both political parties when it comes to passing meaningful laws in congress.  They’ll leave out the outsized role of the administrative state, and won’t mention governing by executive order.  They’ll leave out irresponsible spending, interventionist military action, and the promotion of extreme social agendas.

But they’ll get one thing right: violence and political change shouldn’t go together.

When Texans finally get the referendum they deserve, and when they democratically choose to leave the union, will the Times stay true to form?  Will the media elite respect our democratic effort, or will they condone a violent response?  The Times is on record as opposing violence in politics.  Will they support a peaceful Texit effort, or will they prove themselves hypocritical?

They say “you can’t have your cake and eat it, too.”  If democracy trumps all, as perhaps politically it should, then a democratic vote authorized through legal means by the state legislature must be respected.  The Times can’t advocate for democracy only when they like the outcome.  Time will tell if they’ll flip or not, because Texit is coming.  The only thing left to determine is the timeline.