Prior the Presidential election last November there was a belief among the political class here in Texas that a Hillary win would turn the Texas Nationalist Movement into an unstoppable juggernaut, and a Trump win would kill us.

But we held out that while a Hillary win would give us a boost of additional momentum, a Trump win would do the same, just over a longer time period.

Now, while I am an optimist, I am also, at my very heart, an extremely patient realist. Realism lives in the math. And the math shows that we are, again, correct.

In the days after the election, the TNM surveyed it supporters to ask them how the election results impacted their support for Texas independence. We wanted their immediate gut reaction to the results.

The questions posed was this: “How does the election of Donald Trump affect your support for an independent Texas?”

To listen to those whose sincerely hope we will “just go away,” the results should have been a bloodbath for us. After all, they also sincerely believe that we exist solely as a reaction to an Obama presidency. If their viewpoint was correct, we should have seen 90% or more of our supporters join the “Moses Rose Brigade” and give up on independence. But that’s not what happened.

Instead, the people responding that they no longer believed in an independent Texas came in at a whopping 1%.

Apparently, the rumors of our death have been greatly exaggerated. 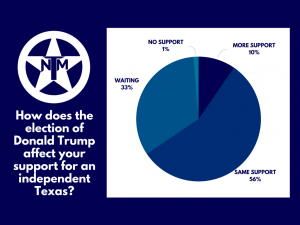 Unsurprisingly, there was a significant percentage that wanted to adopt a “wait-and-see” stance. One-third of our supporters fell into this category. Again, not surprising given the fact that many of those supporters likely expressed their support in the heat of the moment. Those are the folks that we figured would give the union “one more shot” and would again be disappointed by the results. For them, the old commercial for Mr. Microphone comes to mind: “Hey, good lookin’! I’ll be back to pick you up later.”

What did come as a surprise was the percentage of supporters whose support was stronger because of the results. Over 10% are more passionate and fired-up than they were before the election. This is a phenomenal result. Let me be pointed about these folks. They will be the volunteers and the donors that will make Texas independence a reality for all of us. They will be the ones who end up carrying everyone across the finish line.

But the story, and the math, doesn’t end there. Remember, the world didn’t stop after the election, and neither did the TNM. It’s what has happened in the weeks since that tells the real story.

Since the first of the year, the TNM has been firing on all cylinders.

Every outreach event conducted by our field volunteers nets 100 to 300 new supporters. Our social media numbers are growing at a faster pace than in the months preceding the election. Online vote pledges are higher than in the final three months of 2016.

In short, we are not only alive, we are working and we are winning. Perhaps the only thing that died was the opposition’s confidence that they could outlast us.