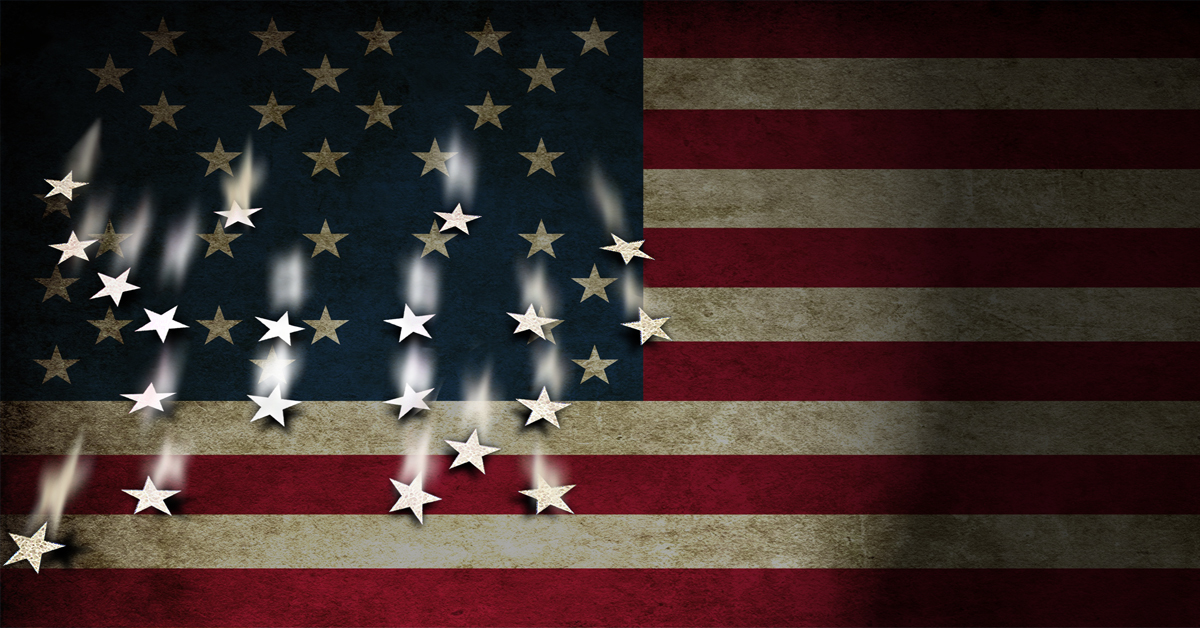 Divorce is rarely a happy occasion. It can be a strain on all involved, particularly children. However, at times it is necessary. This is principally true where there is abuse, theft, and infidelity in the relationship. Sometimes people change for the worse (or at least put down their masks), and in a moment of clarity you realize that your differences are indeed irreconcilable. Comparatively, the pain of splitting up is judged far less than the pain of sticking together. On that score, one political opinion writer joins a growing chorus of mainstream pundits and editorialists in calling for one of the biggest break-ups in world history: the peaceful splitting of the USA.

It is long past time for an amicable divorce of the United States of America. There is simply no common ground with the Left anymore. We are now the couple screaming at each other all night, every night as the kids hide in their room.

The author doesn’t seem to approach this subject with relish, just resignation. “We cannot come together, but we do not have to live like this.” wrote Jesse Kelly, a former combat Marine and congressional candidate, now writer for the Federalist news site. “Stop clinging to the past and acknowledge where we are as a country, not where you want us to be, not where things were when your grandpa was storming the beaches of Normandy. Where we truly are.”

Kelly has grasped something that more and more Americans are now realizing, particularly after the recent story broke on South Carolina considering secession over gun control: no longer does there exist a common frame of reference for politics and values in the Union. The gulf between the left and the right is so insurmountable, even differing on the most basic of concepts (like gender), that there is little semblance of a common or bonding purpose or principle. Even our formerly uniting symbols, the flag and the anthem, are now objects of division from the schools to the stadium. And since we seem incapable of working together as in the old days (i.e. both Kennedy and Nixon grasped the dangers of international communism), it would seem that the only course left is domination.

Effectively, the results of such political resolve in a Union that is essentially split down the middle is alternating autocracies shifting on razor-thin majorities, e.g. the tyranny of the 51%. When the left holds power, they will do whatever they can to suppress the right and force their 180° out-of-phase values on society. And when the right holds the levers of the infernal-machine, they will try to do the same according to their values. And so, we will establish national policy that bans all guns and also protects the right to bear arms. We will protect life in the womb while making sure that abortions are available at any point in (or shortly after) a pregnancy, for any reason. We will champion free speech and work furiously to suppress it if we dislike what’s being said. Now, does that really sound like a workable or even sane idea to anyone?

However, as Kelley suggests, there is another way. Instead of this ridiculous back and forth authoritarian flip-flop, shredding the Constitution in the process, why don’t we just agree that there’s just no living together. Then, we could split the Union and its assets peacefully, just like civilized people who can’t seem to agree. That way, both sides could have the government they want for themselves, following their political beliefs to whatever ends those principles take them.

Is this really such an impossible idea? It shouldn’t be. After all, there’s nothing in federal law or the Constitution against it, and the ninth and tenth amendments indicate secession is a power reserved to the states. That’s right! Its legal. And for those that want to cite Texas v. White on why states can’t leave the Union, don’t bother. TVW is not the Constitution, and COTUS does not grant the court the power to create law, which is what TVW attempts. Besides, those currently appealing to the infallibility of the courts likely wouldn’t want to be in the unenviable position of defending similar unconstitutional decisions like Dred Scott v. Sanford,  Korematsu v. United States, or (where the rogue court started) Marbury v. Madison.

And even though a state can legally and freely leave the Union, as surely as they freely agreed to join it, to even speak of it (in certain company) is akin to uttering heresy. Well, it can only be heresy if you see the federal government as God, in which case I’d say to such a religionist that they must have pulled the short straw when they were distributing deities. Kelly argues:

Anyone who thinks [splitting up the Union] is a radical idea has an extremely narrow view of history. If you don’t believe me, go try to book a plane ticket to Czechoslovakia, or look at a map of Europe from the year 1600, then look at one today. See any differences? Borders move. Countries split and change hands. They do this for a myriad of reasons. Ours would be a major cultural shift toward the left and half the country refusing to go along with tyranny.

A plurality of Americans already believe secession is a right (according to Zogby), however, for many, the first place they retreat to when the topic of splitting the Union comes up is the Civil War. You may have heard it before, “Well, that worked out great the last time, didn’t it?” Folks often have a knee-jerk reaction to this concept, one that our founders found much less radical than we do now. However, to claim that some-how 19th century “rules” still apply in the age of Brexit is an ignorant assertion. “Violence is how this was settled before,” they may say. “And violence is how it will always be settled.” However, it’s important to note that a great number of things are done differently now than they were nearly two centuries ago, including how Western societies approach a political schisms. Also a factor, the severity of that schism compared to ones in years past. As Kelly put it:

We are a nation hopelessly divided. We are more divided now than we have ever been in our history. And before you start screaming at me about the Civil War, keep in mind that bloody conflict was fought over one major issue. In those days, take ten families from New York and ten families from Alabama, put them all in a room, and you’d find they mostly had the same values (and bad accents). Now, fast-forward to today and do that same thing. Those families have virtually nothing in common. We as a nation have polarized and separated from each other.

Slavery (or at least the invention and preservation of the eternal mystical union concept) may have been a dividing topic for 1860, one that people were willing to shed blood over. However, today there are literally dozens of such deeply dividing issues. We have already separated from each other, secession would only make it official, and you need only to tune into the news on any given day to realize the truth of it. The next time a civil riot breaks out in a major city, where violence erupts, lives are endangered, and property destroyed, ask yourself if that is preferable to letting people make their own decisions on how they should live. Would the right-wing really care if the left-wing in their own country were trying to assemble their gun-free, open-borders, Euro-style, socialist paradise? I hope not. Would it gnaw at the hearts of the left to know that somewhere in a right-wing country, people were enjoying a greater measure of freedom than they allow themselves, that life was protected from the womb to the tomb, and that government power was reduced to only the things that are absolutely necessary? It shouldn’t. But even so, each group should ask themselves how many people they are willing to kill to impose their way of life on the other side. Civil war or not, government ultimately represents a monopoly on the use of force. To protect the sort of laws they favor would ultimately necessitate the arrest or killing of those who stand in the way of the rising social order, splitting the Union notwithstanding. Is it really worth it?

While I believe that Texas would be wise to maintain her own separate sovereignty apart from yet another union, the idea of splitting the USA according to ideology is an idea whose time has come. Such a divorce is not ideal, but sometimes the only solution is to separate. This was true between the US and Great Britain, between Texas and Mexico, India and the UK, Great Britain and the EU, and now among the states of America. If for nostalgia’s sake, or our worship at the altar of Lincoln, we insist on keeping the Union together, determined to continue the holy-war (glory, glory, hallelujah!) to force our will on the 49%, confident that we will eventually make them like what we’re forcing on them, then we at least better be prepared to be on losing side of that equation. It’ll happen! Make no mistake. I’d rather prefer to see the reality of government of the right-wing people, by the right-wing people, for the right-wing people, while also letting the left have theirs. The alternative is to continue the fight to force on people that which they likely will never accept.