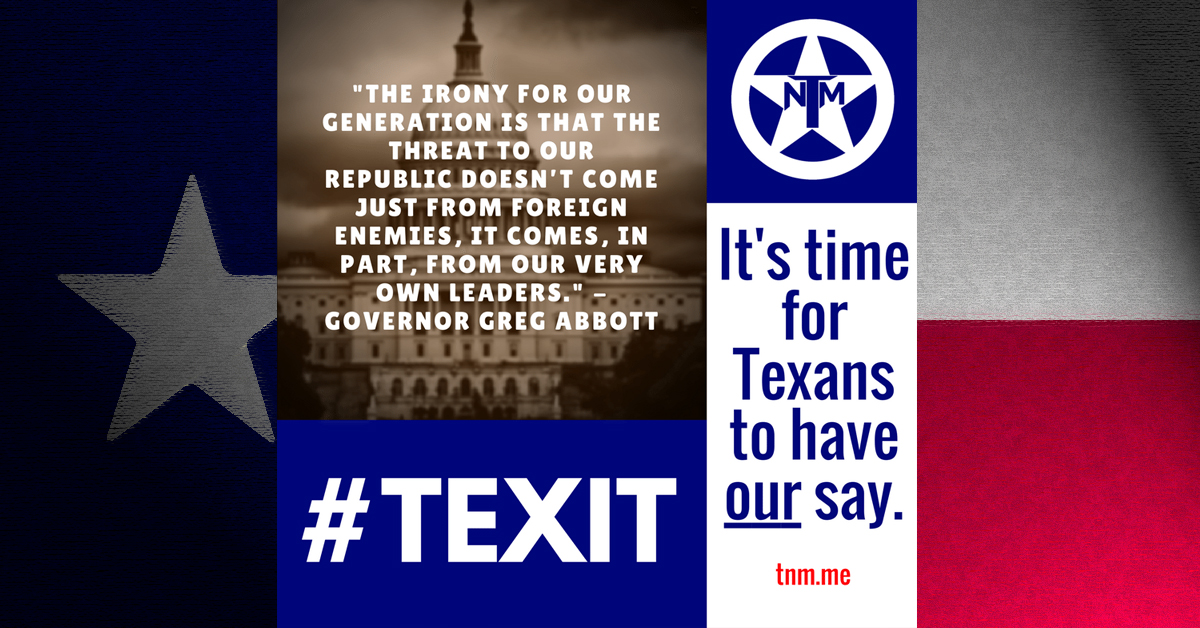 There’s a curious thing about reading the foreign press on news from the states: not being directly impacted by that news, with the foreign press there can be less temptation to shape the story into a narrative that feeds the biases of the reporter. Because of this, you sometimes get some impartial and accurate reporting on certain topics, whereas domestically, these same stories are either spun or just ignored. This was certainly the case with Latin America’s Economíahoy.mx’s recent article by Jaime Palacios, “‘Texit’, the independence movement that can shake the foundations of the United States.” (Note: the article was originally in Spanish, and any quotes featured are translated via Google.)

The Economíahoy article is a general overview of the merits of Texas independence and focuses on the Texas Nationalist Movement, the largest and oldest on-going organization promoting independence in Texas. It begins discussing the history of Texas’ founding, Texas Independence Day, and even refers to the Battle of the Alamo as a “massacre,” at the hands of Santa Anna. Then it gets into specifics about Texas’ chances of reasserting her independence, using data that hardly gets a fair-hearing on this side of the Rio Bravo.

Palacios mentions the popular support that an independent Texas holds with Texans:

The idea that Texas can decide its future is not something exclusive to the TNM. According to internal surveys conducted by the organization, “48% of Texans are in favor of independence” and 16% “are still undecided.” For that reason, the TNM has been betting for years for a referendum to be the Texans themselves “who decide their own status.”

The article also describes other facts that flesh-out the popularity of Texit. Such facts mentioned are:

Jaime then went on to describe some of the qualities that Texas possesses that will help it do well as an independent nation:

The article finishes with the legal argument and models for Texit. It accurately reports that there isn’t anything in the U.S. Constitution nor federal law that forbids a Texit and that “‘the decision power falls on the people of Texas themselves.'” Additionally, the Texas Constitution’s Bill of Rights recognizes Texas’ right to leave the Union. And although the successful Brexit effort and the Scottish independence effort are an inspiration for Texas, the inevitable Texit (as borne out by the polls) will differ in areas, as Texas has “‘its own way.'”

Hat’s off to Economíahoy.mxfor doing the job that the U.S. press largely refuses to do: getting it right on Texit!