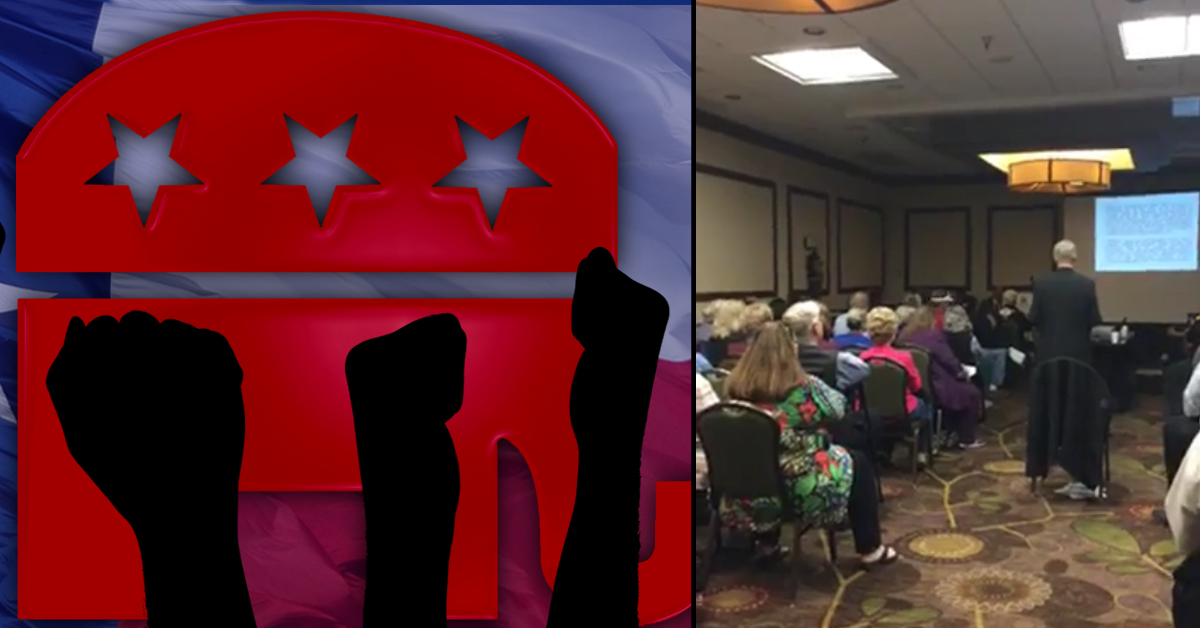 A year ago, did you really think we’d be standing here, like this? Then, Texas Speaker of the House Joe Straus was riding high, perched upon his Speaker’s chair, the gate keeper of the legal agenda. Now, he’s retiring from his seat and speaker’s role, and of last night, with the reprimand of his own party. In a 77 to 21 vote, a resolution to censure Joe Straus was passed by Bexar County Executive Committee of the Texas Republican Party.

The resolution accuses Straus of taking actions “in opposition to the core principles of the Republican Party of Texas platform.” The document goes on to list specific violations, such as abuse of “the power of his office,” obstruction of the governor’s agenda, “walking off the job” in his premature adjournment of the special session, setting aside parliamentary rules to quash dissent, using his powers to kill republican party-approved agenda items (school-choice, right to life, etc.), and others.

The Executive Committee meeting, itself, had but a singular purpose: adoption of the resolution. The resolution was read, accompanied by video showing evidence of Straus’s obstruction and contempt for the concerns of his fellow Republicans. After that, they moved to a short debate where representatives from both sides made their case.

In the testimony of the anti-censure faction, they wondered at the necessity of a censure when Straus was retiring, defended Straus as stalwart of the party, and suggested that Democrats are a more appropriate political target. The case was also made that Straus should have been invited to defend himself. The pro-censure side noted that Straus could have come if he so wished, by chose not to. They also queried: if Straus, with the complaints against him, was not an appropriate target of censure, who then would be? Straus opponents additionally noted that adoption of this censure would serve as a warning to other Republicans who would openly subvert the agenda of the party, deeming also that the word “tyrant” is suitably applied to Straus.

Both on a federal and state level, the Republican Party leadership seems as though they deeply wish they had some other constituency other than the one they have. Some, like Straus, instead of running as a Democrat (a party with which he has more in common), run as a Republican, do their best to appropriate the image of a conservative, but then stanchly oppose the wishes of their base behind the scenes. That’s fine if you support more progressive ends and honesty doesn’t mean much to you, but terrible if you believe in truth and expect your party not to actively oppose its own stated goals. While not a complete loss in term of his politics, far too often, Straus used his powers to deny a vote to legislation based on even the most basic of GOP core principles. After years of this, combined with the way he ran the House as his personal fiefdom, GOP voters had enough.

One person at the meeting suggested that Straus was merely the victim of badly-worded bills, and that he would otherwise have officiated in a more agreeable manner. Ridiculous. While that may be true on occasion, the evidence is clear on how he used his powers: not to aid conservative legislation, but to kill it. Did Straus act this way so as to protect the special interests who funded him, or out of his own personal biases, or to provide cover for his House allies that play the same game of pretend-conservatism as him? Possibly, all of the above. However, in driving home this final nail in coffin of Straus’s political career as a Republican, I think Texas has officially turned a corner. The message to those in Texas GOP who think they can put personal ambition before their party or state is clear: It’s not enough for you to hold power; you are expected to deliver… or else!