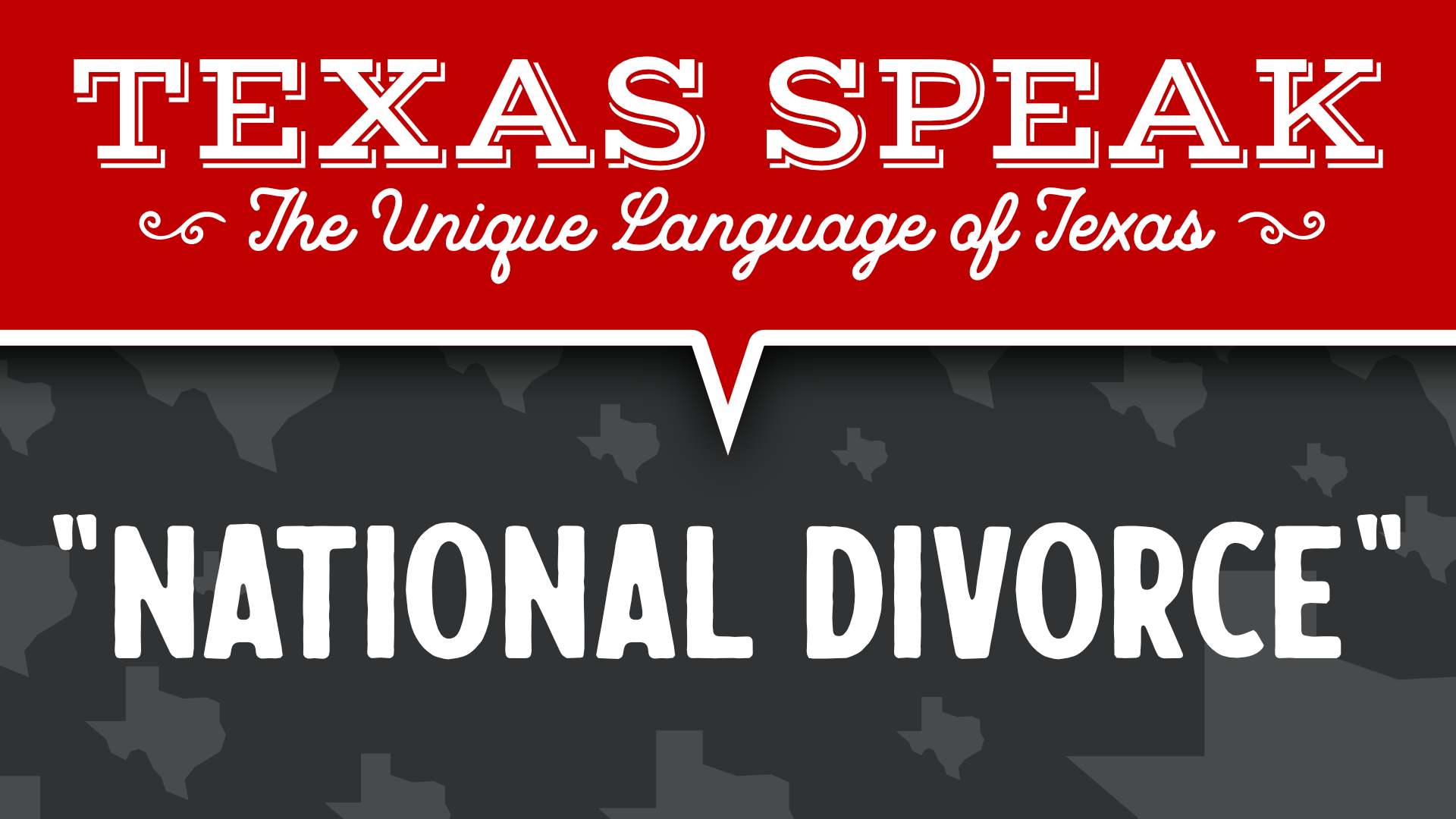 American culture understands what “divorce” means, the legal dissolution of a marriage.  Is this a good way to describe the Texit process?  Can we simply “divorce” the United States?

Once upon a time, divorce was pretty well forbidden.  Later, it became fairly common.  Still later, it became the anticipated result of a union.  Is a “national divorce” from the US the solution for Texas?  Let’s break down the situation through a variety of perspectives on marriage and divorce.

For some people, their wedding day sticks in their mind as one of the best days of their life.  For others, that day isn’t remembered so happily.  Either way, it seems like on day one, optimism tends to run high.  After all the “I do”, there’s typically a time of peace, if the union was well advised in the first place.  While there are of course exceptions, it seems like most unions start with some intent to remain perpetual.  “Till death do us part” is part of the standard language.  Even so, with roughly 40-50% of marriages ending in divorce, there are many well-intentioned unions that aren’t perpetual.

When it comes to the relationship between the US and Texas as a marriage, here’s an important point: the intent for a union to be perpetual is a nice idea, but intent doesn’t guarantee outcome.  Even a union started with perpetual intent may not be permanent in practice.  We accept that as reality when it comes to marriage and divorce.  The idea that the United States as a “perpetual” union is a nice idea, but similarly may or may not hold up in practice.  The initial intent of the union may come crashing into a wall of reality.  (We’ll skip the debate as to whether the US was designed as a perpetual union in the first place.)

What about that one time?

You may remember a time in US history when Texas and other Southern states filed for divorce from the US.  In that case, the parties went to war, one side to maintain the union and the other side to enforce their right to leave.  The “maintain” group won the war, and later famously declared in Texas v. White that the “leave” group had no right to leave in the first place.  As we examine the “marriage” between the states and the Federal government, where does the example of the US Civil War fit in?  It’s clearly a case where one side physically overpowered the other and forced them to remain in the union.  What do we call that in a marriage?  Abuse!  To say that the Civil War somehow proved that states cannot leave the union is to make the same argument that abused spouses have no right to leave.  If the union must be maintained by force, if I must beat or threaten my wife to maintain the marital relationship, is that a “good” marriage?  Of course not.  It’s immoral if not blatantly criminal to beat my wife to make her stay.  How can we then make the exact same argument that the Civil War somehow overcomes a state’s right to leave an abusive union?

What about a prenup?

As divorce became culturally more common came the evolution of “prenuptial agreements.”  When both parties come with assets, ahead of time the parties agree on the distribution of those assets should the union dissolve.  On the one hand, it’s a bit pessimistic to decide how to divide before you even make the union.  On the other hand, it’s a responsible preparation in advance of difficult circumstances.

The idea of a prenuptial agreement is relevant to the Brexit process.  Britain exited the European Union according to the terms that were agreed in advance for how to exit the union.  In the Britain-EU marriage, there was a prenup, and the parties split according to the predetermined process.  Unfortunately for the United States, the union between states was formed before such prenups were a thing.  Although culture and history has evolved to the point where unions between countries now have clearer terms of separation in advance of the union, the US has no such agreement.  Does that mean that there can therefore be no separation, ever?  Of course not, only that the terms and process have not been set in advance.

Is divorce a measure of success?  I’d say not.  While many of us are familiar with individuals who got a divorce and then their life improved, even those people for whom it was a long-term positive step would likely say that it was difficult to go through. Divorce is always hard, and always represents a failure if the union was well-intentioned in the first place.  Divorce is sad, the result of failure of one or both parties to maintain the mutual respect necessary for relationship.  In many ways a divorce is a loss, not a win.

Even though we openly advocate for the separation of Texas from the United States, a “national divorce” of sorts, and while we believe that Texas will be better off if we move on from the dysfunctional union and try and start a new life, such a separation represents a failure.  In the case of the union between Texas and the US, the US has been abusive and unfaithful.  Although the terms are laid out clearly in the US and Texas constitutions, the Federal government has expanded its role beyond the terms.  The Federal government has been unfaithful in its management of state autonomy, in its fiscal irresponsibility, and in its expectations of the states.

To see the United States fail is in some ways sad, but will be the expected outcome of abuse and unfaithfulness on the part of the Federal government.  The split will be difficult, but we are confident that the future of Texas without the US will be happier, brighter, and truer to our principles.

We have on record a previous divorce decree that starts like this:

When, in the course of human events, it becomes necessary for one people to dissolve the political bands which have connected them with another, and to assume among the powers of the earth the separate and equal station to which the laws of nature and of nature’s God entitle them, a decent respect to the opinions of mankind requires that they should declare the causes which impel them to the separation.

Given the causes that impel separation of Texas from the United States, it seems likely that a “national divorce” is indeed coming.

Back on the market

Another point of comparison is what is expected after a divorce.  It is nearly cliche’ that divorced individuals get “back on the market” and go out looking for a new companion.  Should a previous relationship with the US limit the ability of Texas to form a new relationship?  Of course not.  Can a post- divorce Texas have allies or friendly relationships without choosing to join another union? Of course.  If Texas were to find a suitable partner, could we choose to enter another union in the future?  Of course.  Should we not find a suitable partner, could we remain “single” in perpetuity?  Of course.

In summary, Americans understand what divorce looks like, and there are many parallels when it comes to considering the separation of Texas from the United States.  In general the public doesn’t argue that divorce in marriage is impossible, and the different nuances of divorce scenarios are fairly commonly understood.  The case for Texas’ separation is just as clear, just as rational, and the split is just as possible.  Now all we need to do is to help the “national divorce” scenario be commonly understood.

If you’ve reached this point in the article and want to understand more about what the Texit process will look like, consider these resources.

Daniel Miller’s book, Texit: Why and How Texas Will leave the Union

In this article:featured, national divorce, Texit