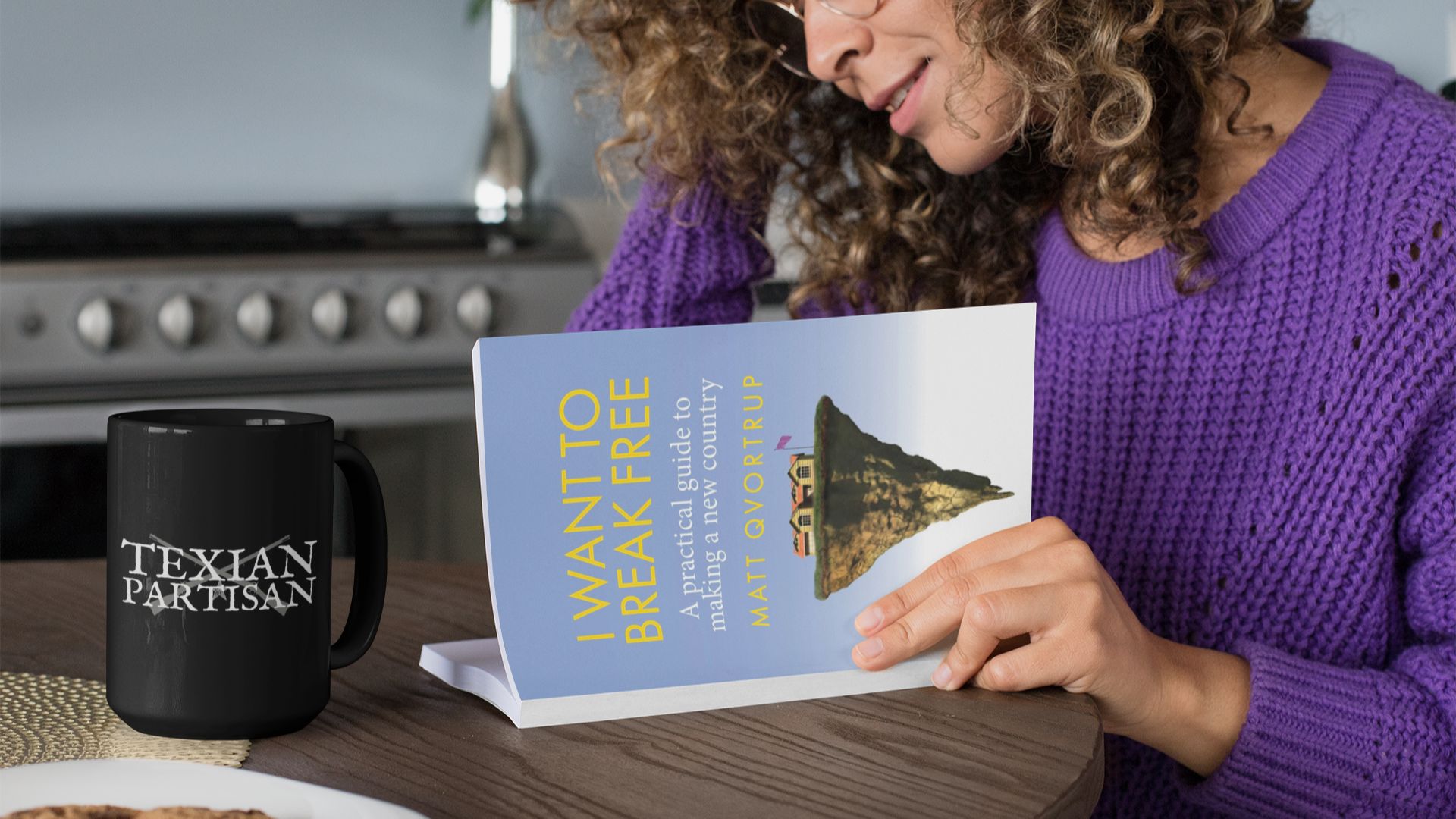 “Creating a new state, establishing a new country, is possible. But only if you have a clear vision of what you want to achieve and are willing to make sacrifices–and, occasionally, to break the rules.” —Matt Qvortrup

Evidence-based and rooted in a profound and extensive examination of data and history, Matt Qvortrup’s current publication, I Want to Break Free: A Practical Guide to Making a New Country, offers an astute and unmatched reckoning of global secession movements, past and present. How do such crusades arise? What occurs along the road to independence? Where does sovereignty ultimately lead? These and other queries are addressed throughout the recently released paperback and ebook.

Viewed within the present-day framework of an irreversible erosion of individual liberties, Qvortrup’s book makes a great deal of sense, particularly to those working to make Texas an independent nation once again. This precise “guide” is a must-read for anyone interested in independence movements—whether as a unionist, an independence seeker, or an on-the-fencer. Furthermore, the book is an eye-opener for those who haven’t previously studied secession through a historical lens. The book’s novelty: It isn’t heated political propaganda intended to sway readers to a particular viewpoint; rather, it’s a straightforward account of how national independence is achieved.

An international expert on political independence referendums, Dr. Qvortrup has spent decades responding to invitations—“sometimes below the radar; other times above board”—to advise sovereignty supporters (and opponents) across the globe regarding their official independence strategies. In I Want to Break Free, Qvortrup draws extensively on his professional experiences, penning what is essentially a guidebook on issues related to independence movements. A sampling of groups with whom Qvortrup has worked includes: Israel/Palestine, Northern Ireland, the U.S. State Department, the European Union, Sudan, Scotland, Hong Kong, and Ukraine.

A Roadmap for Independence

“This [book] is written for those who want to create their own state. So, if you are reading this book with the aim of setting up your own independent country, you have come to the right place” (p. 12).

Notwithstanding the diverse natures of various secessionist groups, the inquiries Qvortrup has received from officials, politicians, and diplomats typically center on several common themes. His book is organized accordingly: A brief history of self-determination and the making of new states; How to establish a movement and win support; The legal side of creating a new state; The international politics of creating a new state; Constitution building; and The economics of becoming a new country. The book’s final chapter provides a summary and a “how to establish a nation” checklist.

“At the beginning of the twentieth century there were some fifty acknowledged states. Immediately before the Second World War there were seventy-five, by 2005, there were almost 200–to be precise 192.” Since then, three more states have been established: Montenegro in 2006, Kosovo in 2007, and South Sudan in 2011.”

In Chapter 2 Qvortrup makes the very real point that those seeking to make independence a reality must first appeal to the heartstrings of followers of the movement. Creating a new country is an “emotional task,” with facts often being less important than beliefs. It isn’t enough to articulate and accomplish a list of administrative tasks; nationalist movements need “a credible story, a cause, a banner under which people will rally … a creed for which people are willing to sacrifice everything” (p. 43).

Chapter 3 considers the legality of independence, specifically examining international and domestic law. Additionally, Qvortrup looks at the legal steps that must be taken to become a member of the United Nations (“the ultimate seal of approval of the international community”); my belief, however, is that such a consideration—while appropriate and informative—need not be a gatekeeping variable with regard to the TEXIT movement. One of the biggest failures of the U.S. federal government, after all,  has been a desire to place global relationships ahead of domestic ones.

Regarding domestic law, Qvortrup cites James Crawford, a noted authority on such issues: “There is no unilateral right to secede based merely on a majority vote of the population of a given sub-division or territory” (p, 79). My initial response (“Like hell, there isn’t!”) was quickly nullified by Qvortrup’s follow-up discussion: “What matters is whether a state has provisions in its constitution that allow states to secede.” Insert the Texas Constitution.

In the next chapter, Qvortrup introduces international politics to include perhaps the most chuckle-worthy sentence in the book: “[But] we have got George Clooney on our side” (p. 95). As asinine as such a statement is, the underlying truth is well-taken. Moreover, Chapter 4 makes the factual concession that to become an independent state, a group must be willing to “sign away some of the family silver.”

Being independent means a new country has to pick its battles—a particularly salient observation when Texans are forced to consider the behemoth burdens of the U.S. federal government. Later in the book (Chapter 6), Qvortrup unpacks the issue of walking away from federal debt: “Financially speaking, a new state would start with a ‘clean slate.’ This means that [a] newly minted nation is not liable to pay for the financial obligations and debt incurred by the parent country prior to independence.”

Constitution building is the focus of Chapter 5. Qvortrup more than adequately addresses such relevant topics as: why constitutions are important; constitutions in history; constitutional frameworks; constituent assemblies, and their selections. Reading this chapter aroused feelings of deep appreciation for the fifty-nine delegates who assembled at Washington-on-the-Brazos on March 1, 1836, to draft The Constitution of the Republic of Texas.

“The economics of independence to a degree depends on ‘the ex.’ Like in relationships, a nasty break or a bitter divorce can be costly, and the one who is left behind can behave spitefully.”

The book explains that a new nation must seek recognition from the international community and establish a presence in foreign capitals, including setting up diplomatic and consular offices abroad. As mentioned earlier in this review, Texas’s portion of the U.S. debt will undoubtedly hold a big seat in the exit interview.  Qvortrup, however, cites international law on this issue (p. 145):

The chapter concludes with a review of such economic topics as monetary policy, currency, bitcoin, and even the practical matter of whether students can continue to attend universities and colleges in the “parent” (former) country—an issue addressed in Daniel Miller’s book, TEXIT: Why and How Texas Will Leave The Union (2018).

Texas is at a crossroads with the United States—a juncture from which we likely won’t turn back. Many in Texas believe a breakup is all but imminent. Qvortrup’s book is therefore significant and relevant during a time when words and phrases like independence, sovereignty, self-determination, and TEXIT mean more than they have since, perhaps, 1835-1836 when Texas won its independence from Mexico.

Apart from a handful of seminal works re: God, Texas, and food/drink, few books have found permanent homes on my bookshelf. I Want to Break Free has officially made its way into that collection.

I foresee myself enjoying Qvortrup’s book, even more the second time I read it … which will be soon.

Note: On December 8, 2022, the Texas Nationalist Movement will host a live-streamed webinar with Dr. Matt Qvortrup, where he will discuss his work on independence movements worldwide. Additionally, he will talk about his new book and how it shatters myths about TEXIT.

In this article:featured, Matt Qvortrup