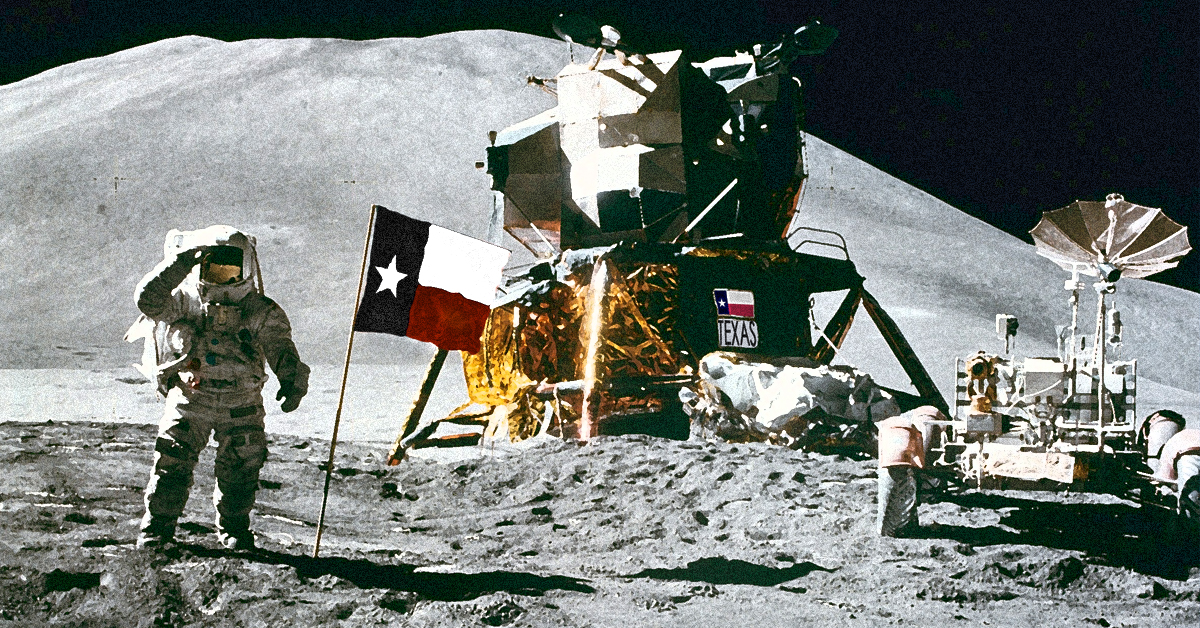 “Houston, Tranquility Base here. The Eagle has landed.” With those words, on July 20, 1969 Apollo 11 Commander Neil Armstrong uttered the first words from the surface of a celestial body. Six hours later, he became the first man to walk on the surface Moon. Yes, “Houston” was the first word spoken from our planetary companion. It is only fitting then to review Texas role in space exploration and its future.

When the former Soviet Union orbited Sputnik in 1957, it was a wake-up call to the United States. Soon thereafter, the Manned Spacecraft Center, subsequently renamed the Lyndon B. Johnson Space Center, was established to manage all crewed space flights. From Gemini 4—the tenth U.S. manned space flight in 1961—through STS-135—the final Space Shuttle flight in 2011—Mission Control at the Johnson Space Center has literally been at the center of U.S. space flight. 23 NASA astronauts are Texans, including Ed White—who died in the Apollo 1 fire—and Rick Husband—who died in Space Shuttle Columbia reentry disaster. As a consequence of this storied history of space exploration, Texas has attracted many commercial space companies.

In 1999, XCOR Aerospace was founded by Jeff Greason in Mojave, California and subsequently moved its headquarters to Midland. It unfortunately ceased operations last year. In 2000, John Carmack of video games Doom and Quake fame, founded Armadillo Aerospace in Mesquite. After pouring $8 million of his own money into the company, he put it into deep sleep in 2013.

Today at least three companies conduct commercial space operations in Texas: SpaceX, Blue Origin and Firefly Space Systems. SpaceX, founded by serial entrepreneur Elon Musk in 2002, has a rocket development and test facility in McGregor. Musk is the CEO and lead designer for SpaceX, but also CEO of Tesla and Neuralink, and founder of The Boring Company. This year SpaceX has 30 scheduled rocket launches.

Blue Origin, founded by Jeff Bezos in 2000, has a space operations center in Culberson County, near Van Horn. Bezos is also founder and CEO of Amazon. Blue Origin was the first company to vertically land a rocket from space (defined as an altitude exceeding 100 km). Their company motto? “Gradatim Ferociter” (Latin for “step by step, ferociously.”)

Finally, Firefly Space Systems, founded by Tom Markusic, P.J. King and Michael Blum in 2014, was headquartered in Cedar Park, an Austin suburb. I write “was” because the company almost folded in 2016 when investor financing fell through. However, one of its creditors bought all of its assets and resurrected the company as Firefly Aerospace in 2018. Firefly is focused on small and medium sized launch vehicles.

As the Governor’s Economic Development & Tourism Office wrote in 2014, “Texas is one of the most important locations for the global aerospace and aviation industry.” It will continue to thrive, even more so, if unshackled from the regulatory burden of Washington. Fifty years after “The Eagle has landed,” allow the Eagle to soar from the independent Republic of Texas!