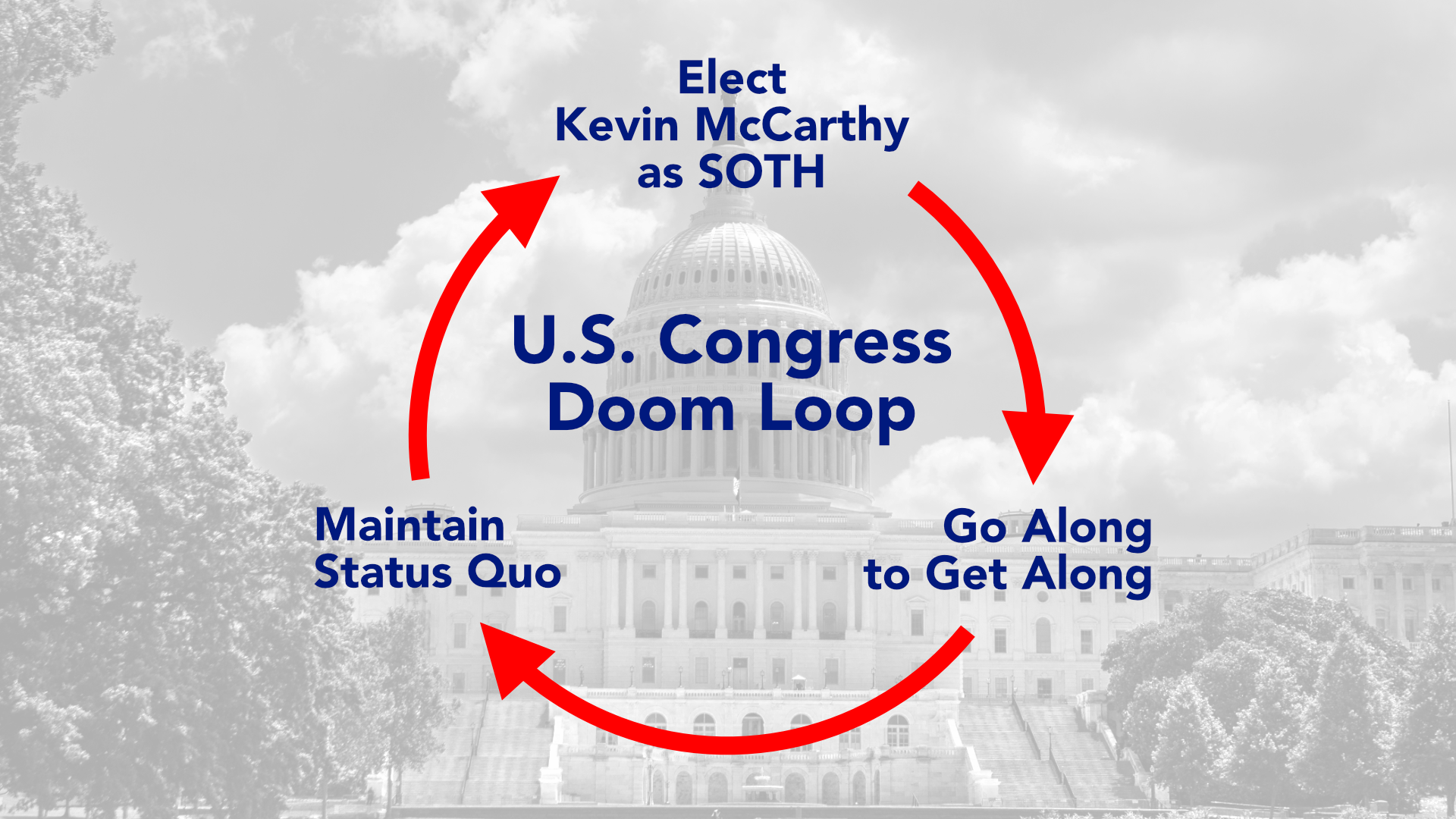 California Representative Kevin McCarthy is widely believed to be the next Speaker of the House, but there’s one problem: He doesn’t have the votes.  A group of conservative lawmakers have prevented McCarthy from gaining the majority.

As a Texan, I take no joy (and have no surprise) that the very basics of government at the Federal level are dysfunctional.  In this week’s episode, the Republican majority of the House of Representatives is struggling to elect a leader, with the race going to multiple ballots for the first time since 1923.  If you want to dive into the politics of Kevin McCarthy vs. the “Never Kevins” who oppose him, or if you want to hear the case for or against any particular speaker, the Texian Partisan isn’t the place for that.

Several things stand out from our Texas-first perspective.  This race for speaker is like trying to vote on who will be the captain of the Titanic: it doesn’t matter, because the ship is going down anyway!  Is there any chance Kevin McCarthy will resolve the national debt, reign in the administrative state, restore state autonomy, protect the constitution, secure the border, or even lead a functional government that truly makes a difference in America?  Hell no, there’s not a chance.  Kevin is as business-as-usual as they come.  In fact, the self-perpetuating nature of Congress guarantees that no one individual or even political party is likely to address any of the issues Texas is concerned with.

Next, the establishment on both sides of the aisle will take advantage of this moment to cast shade.  Here’s a good example from Vox.com:

Republican leaders have to either win over nearly all of the quarrelsome members on the party’s right flank (something that this week’s events show will be extremely difficult) or win over Democrats (something that could alienate the right and land the party right back into another contested speaker election).

The 20 House Republicans who opposed McCarthy’s speakership at some point Tuesday, denying him the majority of votes he needed to win, differ in which issues seem to move them most. Some, like Chip Roy (TX) and Scott Perry (PA), are anti-government spending ideologues. Others, like Paul Gosar (AZ) and Lauren Boebert (CO), are conspiratorial cranks. Some, like Matt Gaetz (FL), may just be mischief-making malcontents.

What stands out to me the most is the characterization of dissent as coming from “right flank” “idealogues,” “malcontents,” and “cranks.”  Guess what?  The majority of people in some states voted for those people to represent their interests!  If Texas consistently has a balanced budget, does that make Chip Roy an “anti-government spending idealogue,” or does it mean he’s just standing up for the principles his state follows?  Assuming uniformity is overtly anti-American.

Also notable is the relationship between 2022 election results and the current list of “bad guys.”  Represented are states like Texas and Florida who voted strongly against the status quo.  Also notable are several states with close election results, some of which could even be called suspicious: Pennsylvania, Georgia, and Arizona.  Boebert’s election in Colorado was among the closest nationwide.  Anyone who doesn’t fit the narrative gets singled out for ridicule.

The article describes Republican leadership as a “doom loop.”  The only solutions proposed are a centrist dream-like convergence of both teams of the uniparty, or to “convince the hard-right to chill.”  Given that both parties just colluded to pass an omnibus bill they didn’t read, it’s hard to blame the Republicans here.

It takes no real effort to see that the entire US Government is itself in a “doom loop.”  Given the state of polarization in the US and the gross ineffectiveness of Congress, a centrist revision is impossible.  So what’s left? All we’re told is, “Y’all need to chill!”  What does that look like?

“Texas can never leave the union”

“The union is perpetual”

“What about defense, or social security?”

“What about Texas vs. White?” (arguably the easiest question to debunk)

Which of these responses address our grievances?  Does staying in the union solve the bureaucratic and regulatory burden of the US?  Does “perpetuity” somehow reign in out of control spending or forever-wars?  Does Texas get so much from the Fed that it couldn’t take care of itself?

Here’s the “doom loop:” the entire system is broken, and the only way out is OUT!  An independent Texas need not be bound by the same petty and dismissive politics.  We need not be bound by folks who say “you can’t” without making any effort to solve actual problems.  Texit is the obvious solution, and the clown show over Speaker of the House is just another sign pointing the way.

In this article:featured, Kevin McCarthy, Speaker of the House, Texit