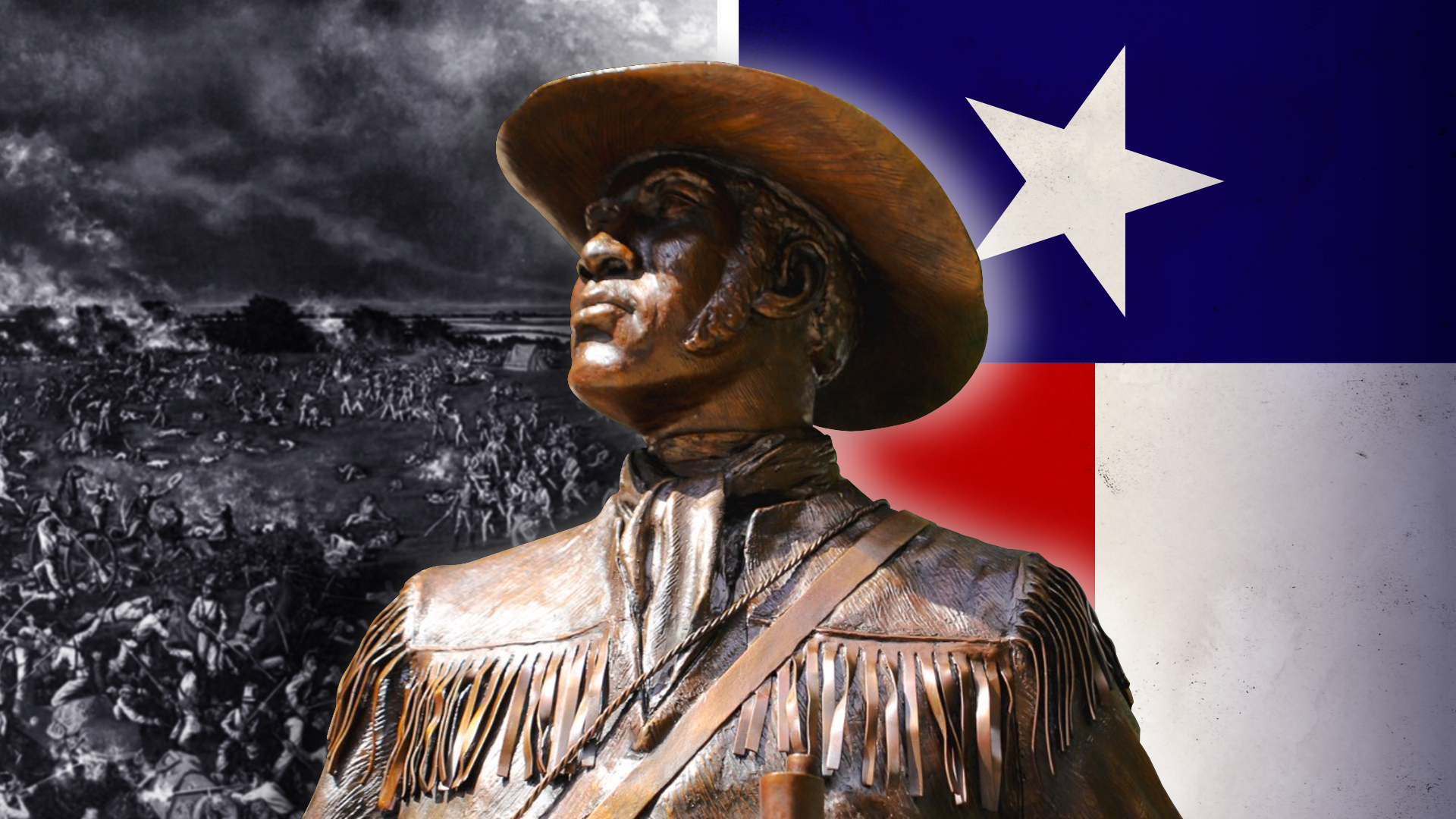 Last week, Texian Partisan brought you the news and story of a recent statue unveiled in Alamo Plaza, honoring Emily West Morgan, “The Yellow Rose of Texas.” That same September day, the Alamo also revealed a sculpture celebrating Hendrick Arnold, a skillful guide and spy for the Texian Army during the fight for independence. Acclaimed Artist Ed Dwight created the impressive bronze.

Arnold was a Mississippi native who emigrated to Texas in 1826—ten years before the revolution—with his parents, his brother Holly, his grandmother Catherine, and five slaves. Arnold’s father (Daniel Arnold) was white; his mother (Rachel Arnold) was black; Hendrick was a “free negro.” The family settled in Stephen F. Austin’s Colony on the Brazos River, where Hendrick’s brother was regarded as white, despite Hendrick’s negro categorization. Both brothers, however, were considered free.

By 1835 Hendrick Arnold had re-settled in San Antonio and married Martina (María) Smith. He soon found himself a significant player in the Texas Revolution.

In October 1835, Arnold and his father-in-law, Erastus “Deaf” Smith, a white man, were returning to San Antonio from a buffalo hunting trip in an area north of present day Austin. The Mexican army, however, led by General Martín Perfecto de Cos, occupied the city and prevented the pair from entering.

The event prompted Arnold and Smith to join Stephen F. Austin’s Texian army, comprised of both regular and volunteer soldiers. Due to his wife Maria’s Mexican heritage, Arnold had previously decided to remain neutral in the Texas Revolution; but he and Smith now offered their guide services to the Texians to help take back San Antonio from Cos.

The repossession of San Antonio took place several months later on December 5, when the Texians attacked Cos in what became known as the Battle of Béxar. Emboldened by an impassioned plea by soldier, Ben Milam (“Who will follow Old Milam into San Antonio?”), the Texian troops were guided into town before sunrise by Arnold and Smith. Following four days of fighting, General Cos surrendered San Antonio to the Texians. General F.W. Johnson praised both Arnold and Smith for their key roles in the event.

A Resourceful and Crafty Spy for Texas

Following the Béxar battle, Arnold and Smith joined Henry Wax Karnes’ cavalry unit in whose service they remained until Texas officially won its independence from Mexico in 1836. As scouts, Smith and Arnold gained a reputation for spying that grew to legendary levels. The Texas Black History Preservation Project tells of Arnold and Smith infiltrating enemy camps on more than one occasion, with Smith often disguised as a Mexican and Arnold posing as a runaway slave. Arnold became characterized as “one of the most efficient members of Deaf Smith’s Spy Company.”

According to “The Afro-American Texans,” a booklet produced in 1975 by the Institute of Texan Cultures, post-Texas Revolution compensation for Arnold included land near present-day Bandera. Hendrick’s brother, Holly, lived there while Hendrick resided near Castroville and ran a gristmill in San Antonio, near Mission San Juan. Hendrick died during the cholera epidemic in 1849 and was interred at Medina Ranch Cemetery. 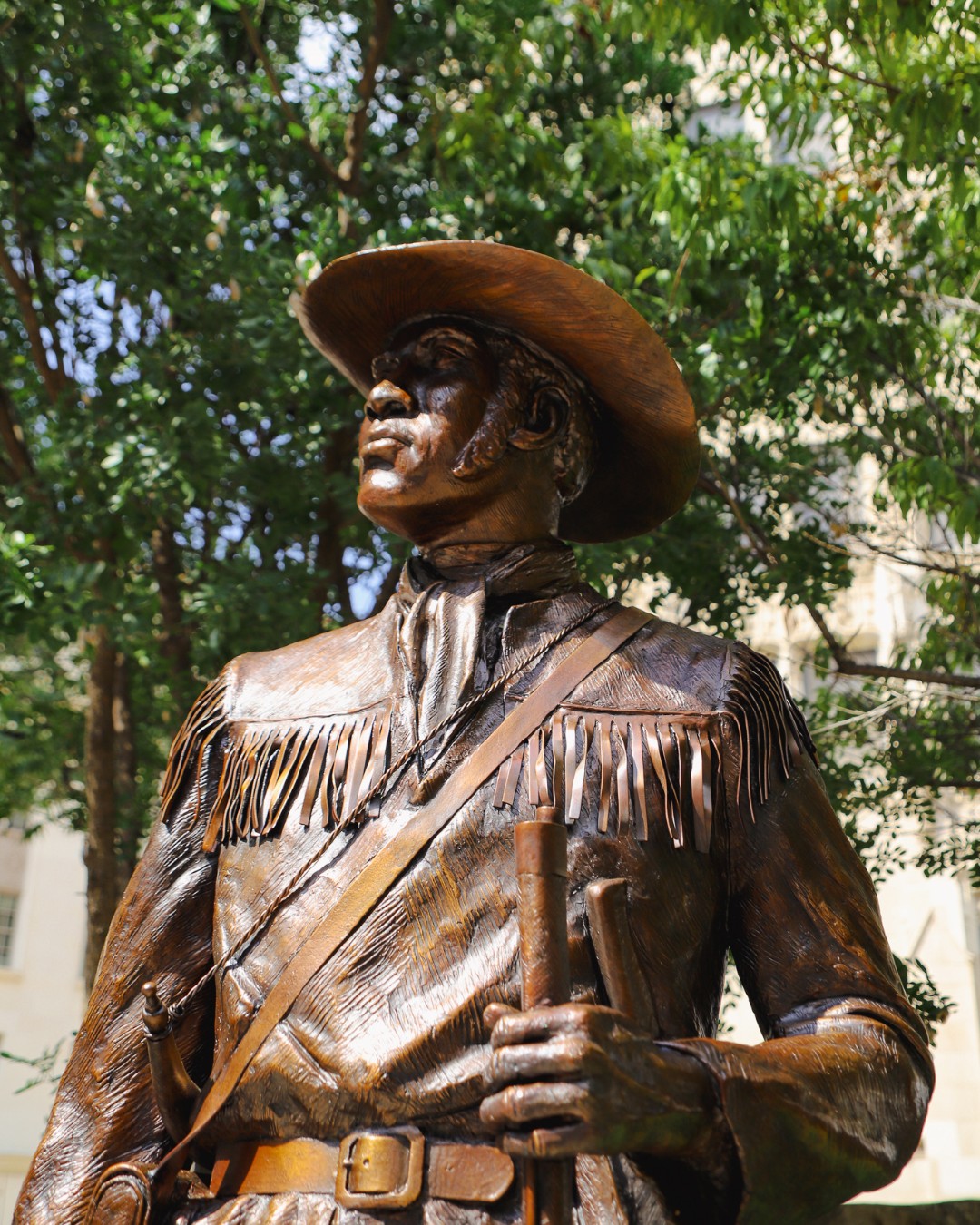 One of two new additions to the Alamo’s Statues of Heroes plaza is this depiction of Hendrick Arnold, sculpted by artist Ed Dwight. Arnold was a key figure in the Texas Revolution as a guide and spy for the Texian Army. (Official Alamo Press Release, September 8, 2022)

The Texas Nationalist Movement (TNM) honors the legacies of those who fought and died for Texas independence. This reverence and respect includes protecting our historical monuments, memorials, and markers, as well as opposing any attempts to devalue and denigrate the Texas Revolution and the role of independence and the preservation of rights as the primary motivation for those who fought in the revolution.