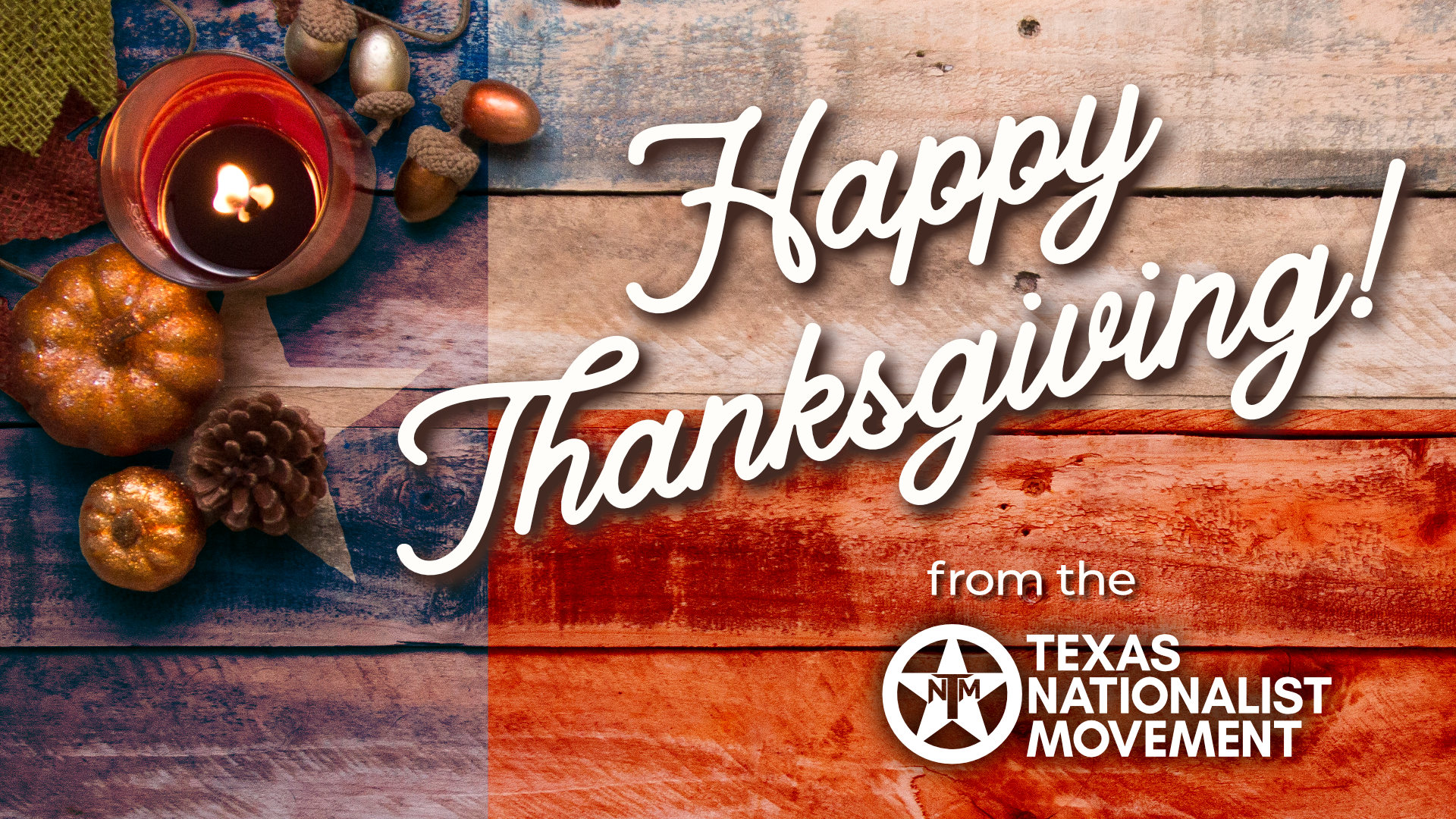 On this day of thankfulness, we asked TNM leaders what they were thankful for about Texas.

The Texas Nationalist Movement is a volunteer organization dedicated to the political, economic, and cultural independence of Texas.  As such, it makes sense that there are quite a few things about Texas that we are thankful for.  Here are some quotes from members of the TNM leadership team.

Texas was born because its people wanted to be free and self governing. Texas is more than a state of mind, Texas is all encompassing of what its people are: diverse. Texas has always represented a promise of prosperity in spite of adversity.- Eric Riddle

I am most thankful I was born and raised in Texas. 8th gen Texian. I was always proud to tell other soldiers while I was enlisted that I was from Texas.- Brian Goode

We will follow through, and honor Sam Houston’s promise that “Texas will again lift its head and stand among the nations.”  Texans’ self-reliance and love of freedom will guide us to be successful in claiming our sovereignty and independence. Texas will be the leader, and the first of many States to claim their Independence in the coming years.- Lori Phillips

1) I’m thankful for the fact that Texas is as large as it is.  One gets the opportunity to see a wide variety of countryside without going to another state or country.  2) I’m thankful I don’t live in the east any longer in one of those states where they don’t appreciate freedom and independent thought and action.  3) I’m thankful that true Texans are willing to help others and are not a bunch of “Karens”, geez those people are ridiculous.- Karl Gleim

I am thankful that my parent’s families decided to move to Texas from Arkansas (Mother) & Alabama (Father). I appreciate the bragging rights that multi-generations have, but I don’t  see how they could love Texas & and being a Texan any stronger than this proud & ‘Thankful’ first generation Texan.-Sam Kemp

I am thankful that my family on my Mother’s side has been in Texas since 1620. And my Fathers family came to Texas about 1830 to try and escape Santa Ana’s terror. Only to wind up fighting in several small battles before both sides of my family fought at San Jacinto. Small World! I am so Proud to be a TEXAN! And so Proud to be part of the TNM and part of a Victorious Movement!!! WE ARE ALREADY WINNING!!! – Manuel Chapa

I came from California. I’m thankful we were able to escape to Texas where our

I am thankful for Texas where Christian, conservative values are still accepted and widely followed by many other Texans.  I am thankful for a heritage – to be part of a culture with such a defining history, marked by heroism, courage, and determination.  I am thankful to live in Texas, where we have just about everything one could want to see – the beach, mountains, canyons/valleys, all four seasons (more in some parts than in others), forest, plains…the list goes on and on.  Miles and Miles of Texas…what’s not to love?- Angela Wetuski

TNM Chief of Staff Daphne Armour put it this way: Volunteers and donors are the lifeblood of our organization.  We would not be successful without either.  The volunteers are needed because these are the folks that are out actively engaging the public on our behalf to spread the message of Texas Independence.  Donors play a significant role as well, this is a large organization with a large operating budget.  We need donors, as much as we need volunteers, often they are both!  Just like in any political campaign, there are cost associated with operating. We need funding for marketing, operations, staff, polling and etc.  We are so thankful that we have so many active volunteers and donors that take this cause as seriously as we do and are helping us to get this over the finish line.

In this article:featured, thanksgiving