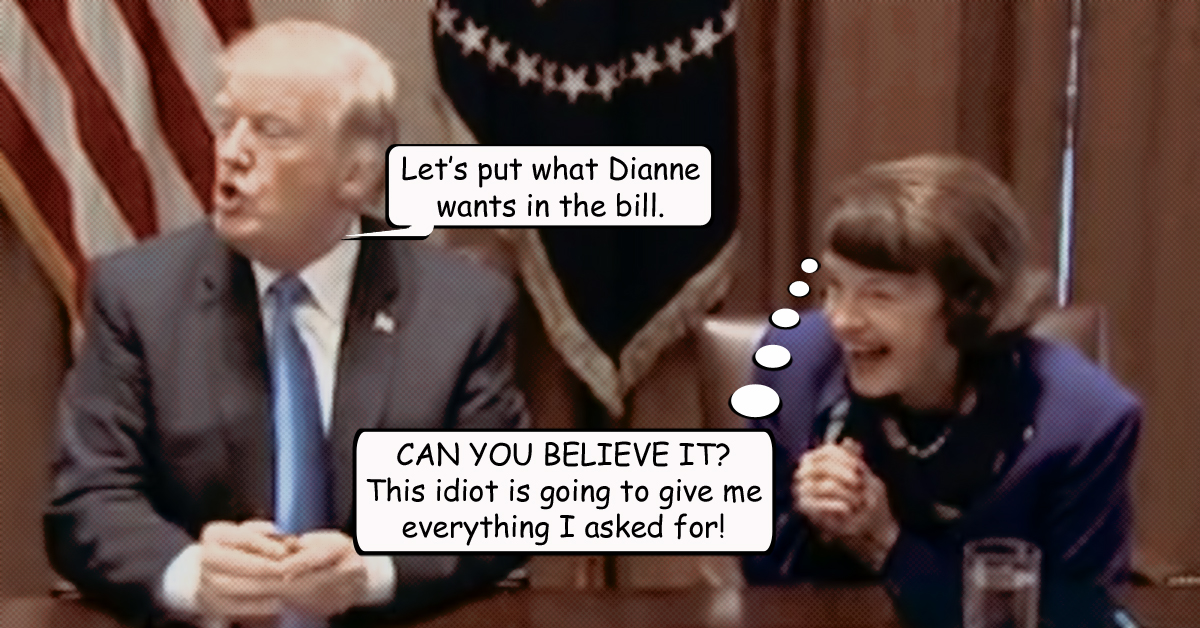 This past week, Donald Trump said a great many things that should give Texans reason to worry that the president is moving to the left on gun rights. In addition to his Wednesday comments on giving government the power to deprive citizens of their second amendment and due process rights, Trump has made further statements indicating support of the gun control goals of Democrats like California Senator Dianne Feinstein (supporter of an assault weapons ban), much to her glee, and much to the chagrin of freedom loving Texans.

In one very illuminating exchange, during a meeting held Wednesday, Trump made a passionate plea for eliminating the natural rights of young citizen:

“Okay, are you going to leave that?”

“Err, whatever you want.”

“Somebody can buy a handgun at 21. Now, this is not a popular thing to say in terms of the NRA but I’m saying anyway, I’m just gonna have to say it….Think of it, you can buy a handgun, you can’t buy one, you have to wait ’till you’re 21. But you can buy the kind of weapon used in the school shooting at 18. I think its something you have to think about. I tell you what I am going to give it a lot of consideration and I’m the one bringing it up and a lot of people don’t even want to bring it up because they’re afraid to bring it up.”

Later, Trump added, “‘they [the NRA] have great power over you people, they have less power over me.'”

Whatever you want. These are key words uttered by Pat Toomey who, in all fairness, has lately not been one of the most conservative members of the Senate. Recently, Toomey has been pushing a bill to expand background checks, a move that has prompted the NRA to withdraw its endorsement of him. However, if Toomey and the president appear to be in agreement, that should be cause for all second amendment supporters to be concerned.

Since the mass-cal event in Las Vegas, Trump has been very clear that he wants a complete ban on bump stocks. On February 20, Trump issued a memorandum to the Department of Justice to establish rules that declare ownership of these bits of plastic a federal crime. However, it’s difficult to see what such a ban would accomplish. Remember, creating a bump stock can now be accomplished by a 3-D printer.

As if all this weren’t enough, Trump even asked Republicans to abandon their efforts to pass national CHL reciprocity, a campaign promise  he’s forsaken, at least for now. Trump’s also indicated that he agrees with universal background check advocate, Democrat Chris Murphy, saying:

Trump’s abandonment of constitutional pretense where gun rights are concerned couldn’t have come at a worse time. At this point, according to a YouGov poll, half of Democrats believe that all guns should be banned entirely. And, according to a NPR poll, 48% of Republicans believe that citizens aged 18-20 should not be able to exercise their 2nd Amendment rights at all, with 59% of Republicans supporting more strict gun laws. If accurate, this is a huge change from just a few years ago.

Needless to say, liberals are thrilled with Trump’s willingness to make a deal, and the needle on gun-control in America in general is moving leftward. And this trend is in spite of a mountain of evidence that indicates gun crimes (and crime in general) has been going down, or that such suggested gun control measures would have a negligible effect. We Texans had better take notice…Trump is proposing far more than any Republican president to stifle our right to bear arms, even surpassing some of Obama’s efforts. And even though damage control at the administration has tried to walk some of this back, can we really afford to blindly trust Trump on this? Can we just have faith that Don’s just conning the Democrats to save the second amendment rather than what he seems to be doing, which is trying to give Democrats what they want on gun control and telling the pushover Republicans to get in line? By no means! Because once that freedom is gone, good luck getting it back, all for the love of Trump.