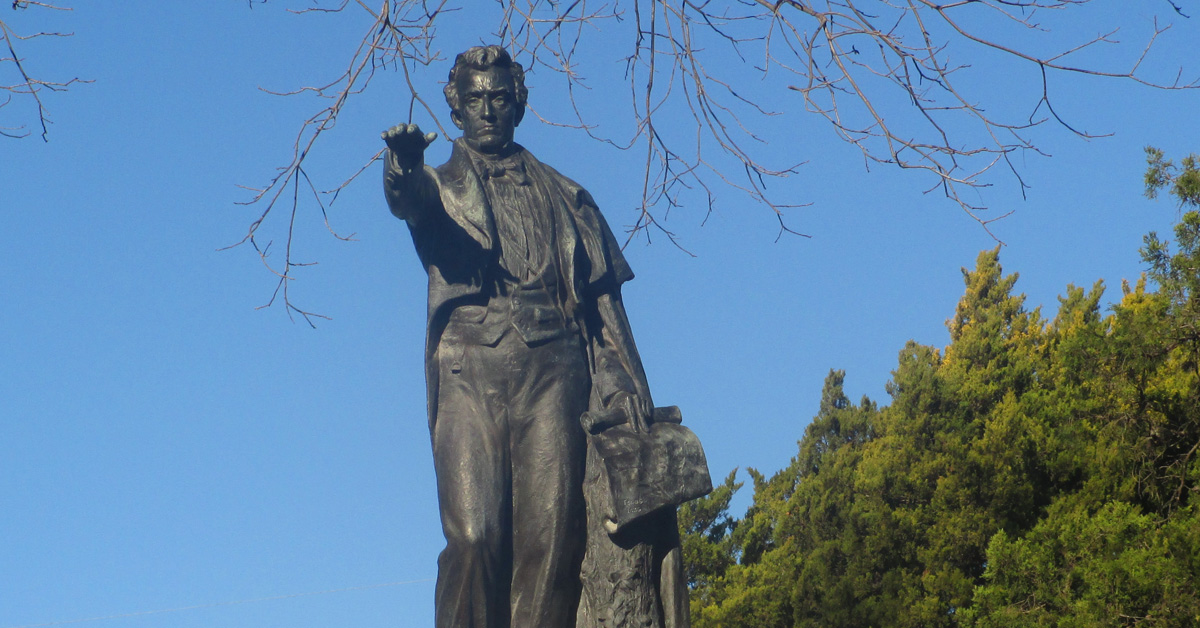 I just finished enjoying a great book on the forging of Texas independence, called Lone Star Nation, by H. W. Brands. If you have any inkling that the founding of the Republic of Texas was idyllic and easy, this book will disabuse you of that notion, right quick! Among the larger-than-life figures of the Texas Revolution that this book evocatively fleshes-out is that of father of the country, Stephen F. Austin. As we approach San Jacinto Day, it’s good to reflect on the lessons of our land’s infancy. What Austin learned back then is equally important today, for both us and our leaders.

Austin was an empresario of the Mexican government, under contract to bring in home-steaders from the United States to settle the wild territory of Texas in the name of Mexico. Austin was a good manager, and his colony prospered.

While Austin believed in greater autonomy for Texas, he took his allegiance to Mexico seriously. When the Freedonia rebellion took place in 1826, Austin condemned it and did what he could to dissuade the Edwards colony from doing such a foolish thing. This because Austin was an honorable man who had made a bargain in good faith. What’s more, he believed in the Mexican Constitution of 1824, which allowed him and his colony liberty to pursue their goals.

In 1833 and 1834, when tensions with the Mexican government were becoming heightened and relations strained, Austin thought that he’d do what had proven successful in the past and meet with the government to negotiate. However, Vice President Farias, who was ruling due to Santa Anna’s post-election illness, found Austin’s solution, to split Texas off from Coahuila y Tejas as a separate Mexican state, treasonable. Farias promptly imprisoned Austin in Mexico City for more than a year.

Now, you might think that was the end of Austin’s loyalty to the old forms of Mexico, but you’d be wrong. Austin had been the most dependable of the empresarios. Where others in Texas openly clamored for secession, Austin refused, believing that their grievances could be solved through negotiation and reform. Even in prison, Austin held out hope that Santa Anna, when he returned, would make things right. He did not. Instead, Santa Anna suspended constitutional rights for all Mexican citizens, embracing despotism. After Austin’s release, which was tenuous and in constant danger of being undone, even then he clung to the belief that the 1824 Constitution could be restored.

Eventually, Austin reached the conclusion that was so obvious to others: the only way to restore Liberty in Texas was through Independence. He signified this change by signing his letters not, “God and Liberty,” after the Mexican fashion, but “God and Texas.” However, the late path that led him to his decision was costly, both to Austin personally, and Texas, who needed his leadership earlier.

Certainly, it’s easy to judge Austin in retrospect. Austin wanted to believe that the principles of the Mexican Constitution were still binding, and I don’t blame him for wishing so. After all, how many Texans and Texas leaders in our own age still think they can reform the corrupt government in Washington that holds U.S. Constitution in contempt? Clinging to nostalgia for the Union that was, many refuse to even consider legal and peaceful independence as an option. But meanwhile, D.C. takes our lands without asking, strikes down our laws through judicial fiat, and dictates a multitude of other rules that are not constitutionally permissible. Yet, in the face of all that, there are still those that insist that we can reform our prodigal government, as if it hasn’t been tried and tried again.

Like Austin eventually concluded, we need to stop clinging to the old forms of a republic that no longer exists in any meaningful way, and I’m speaking of an American republic. If we want to preserve what we have, and reclaim what we’ve lost, it’s not going to happen by remaining with Washington, despite what scheme to wrestle 49 other states into submission we think we have. Time for such measures has passed. Now, we would do well to consider what we stand to lose each moment we allow the soft despotism of D.C. to go unanswered.

If Texas wants its sovereignty back, then we must have the courage repossess it from the federal government that has abused it. What we’ve laid down, we can take up again, understanding that it is not the political union that currently binds us that ultimately matters, but the principles that it was founded on. The same principles that the Union no longer cherishes, Texas will defend. The hour is late, and the longer we delay, the more we damage a prosperous and free future. It’s time to Texit.