In 1983 BC, Hayatou’s hunting party camped by the river after a long day. The river didn’t acquire this name—Rio dos Camarões—until 1472 AD, when Portuguese sailors reached the west coast of Africa. Where the coastline turns south again at 6°N, a river teeming with ghost shrimp (“camarões”) empties into the Atlantic. Hence, the “Shrimp River” or “Rio dos Camarões.”

By 1884 AD, Germany had claimed the territory, now named Kamerun. After World War I, the League of Nations turned Kamerun into a mandate, an order or commission granted to a member nation for the establishment of a government over a former German colony or conquered territory. Kamerun was subsequently split into the French Cameroons and the British Cameroons. (What appears to be an English plural word, cameroons, is a singular name derived from the Portuguese for “shrimp.”)

In 1960 French Cameroons gained its independence from France under President Ahmadou Ahidjo, becoming the Republic of Cameroon. A year later, the people of Southern Cameroons—a region to the northwest of French Cameroons—voted to join the newly independent nation, creating the Federal Republic of Cameroon. This federation was analogous to the original United States, sovereign states united under a general government.

In 1972 Ahidjo abolished the federal system with a new constitution, creating the United Republic of Cameroon. This forced erasure of former sovereign borders sowed the seeds of secession. The changes in Cameroon boundaries through 1972 are illustrated below. 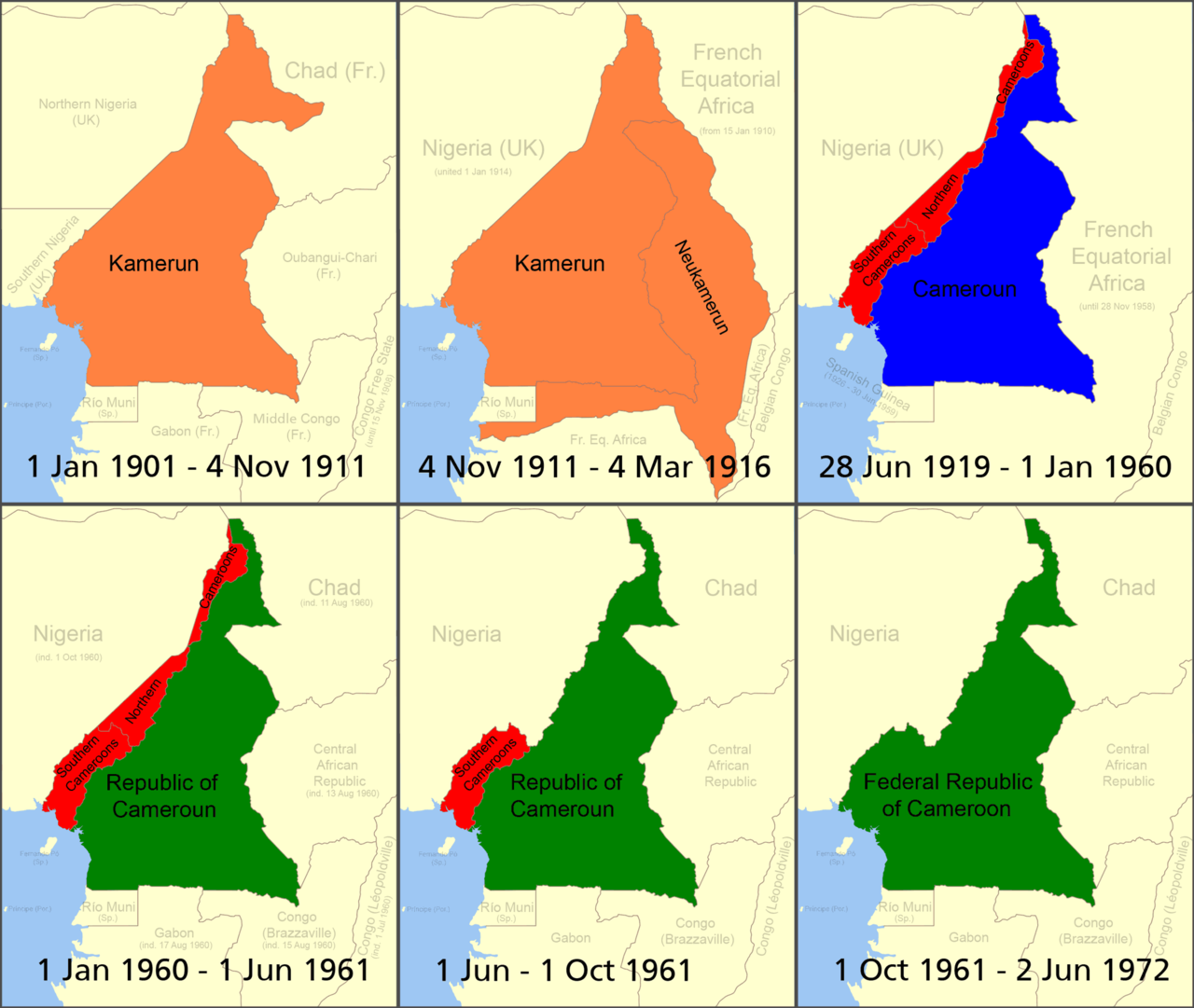 By 1984 the Cameroon Anglophone Movement was created, united by the English language in the former British Cameroons. Not unlike an inverted Canada/Quebec dispute, the French language was being forced into an English speaking region, against their will. By 1990 the Cameroon Anglophone Movement was calling for greater autonomy. The Southern Cameroons National Council advocated complete secession, in a desire to create the Republic of Ambazonia.

A leader of the Southern Cameroons Youth League, Ebenezer Akwanga, was arrested in 1997 and sentenced to 20 years in prison, where he was tortured. He escaped to Nigeria in 2003 and was recently interviewed by “International Business Times” for the article “UN Urges Cameroon To Restore Internet in English Areas as ‘Secession’ Trial Begins.” While explaining why he was imprisoned, he said it was because of what he said, echoing patriots throughout history: “My people need to be free.”

Don’t the words of Akwanga resonate with any free man? We yearn to be free, and our people yearn to be free. Liberty, like eternity, was created in the soul of man, where it is reflected in his society: family, tribe, village, town, city, county, state or country. Yet, when cultures and languages are forcibly synthesized, conflict results. When the general government adopts a one-size-fits-all solution to the whole nation, liberty is suffocated.

We at the Texas Nationalist Movement stand with the Republic of Ambazonia. Your political, cultural and economic independence are necessary as a free people, as are ours, the Republic of Texas. Godspeed Ebenezer Akwanga.

About Andrew Piziali 36 Articles
Andrew Piziali is a retired design verification engineer with a passion for Jesus Christ and liberty. He is a former member of the Collin County chapter of the Texas Nationalist Movement, now writing as an expat from Prescott, Arizona.