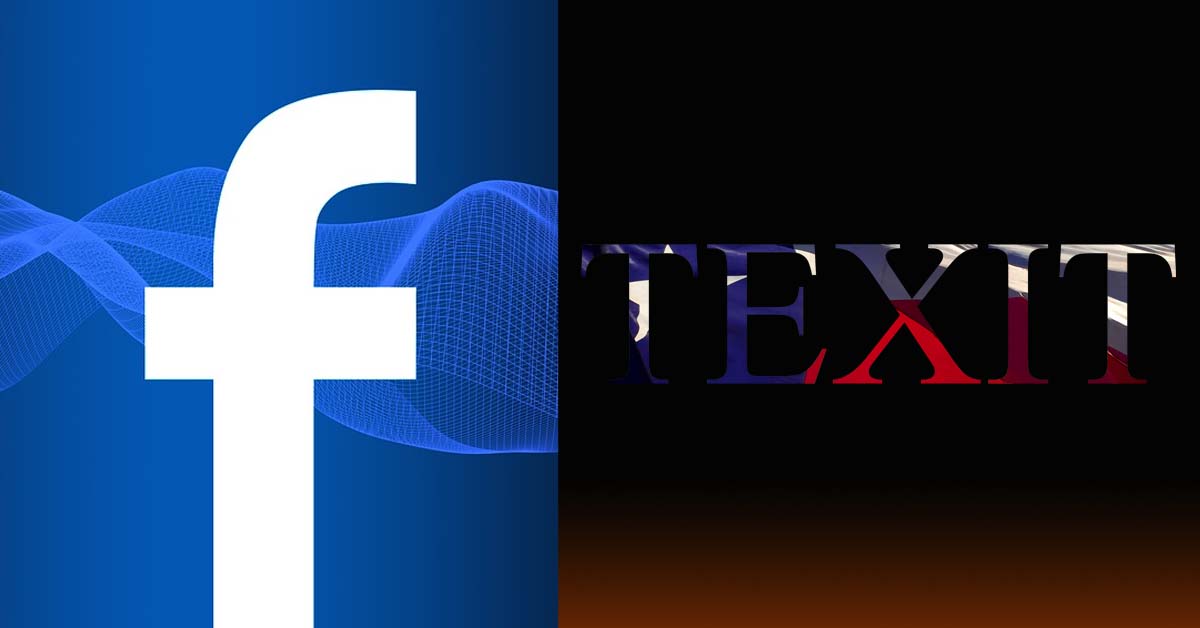 It is no secret to the technologically advanced world that Facebook, the social media platform, has recently fallen under much scrutiny over user privacy issues and data-mining.  Additionally, the platform has also been severely criticized for adding a variety of obstacles to suppress non left-wing political content, making it difficult for its producers to reach their target audiences. This has led to an increasing number of more right-leaning individuals and organizations to file complaints against Facebook over what appears to be censorship. Ultimately, the conclusion many users have drawn is that they will never get a fair-shake on Facebook, resulting in an exodus from Facebook to alternative social media platforms. The great #FaceExit may be under way. And, in an age when interest in self-determination is growing in popularity, what we as individuals do as we re-examine our support for a giant social media platforms may have parallels on what we do corporately as the world re-examines its commitment to giant political unions.

Texas Nationalist Movement President Daniel Miller has joined some of the detractors of Facebook in checking out MeWe, a competing social media platform that boasts “We don’t track you personally and we never sell your personal data.” As Daniel realized that many of his members and supports had moved their social media experience to MeWe he made the comment, “Not going to lie. After the crap that Facebook put the TNM through, I am LOVING watching the mass exodus here.” To this, I commented that “I’m still using Facebook quiet a bit though. You know how it is, everything and everyone else I know are established there. And they have made it a pretty easy to use platform. (All the other crap aside.) Change is hard. #FaceExit”

“Change is hard.” This fact may be Facebook’s greatest protection for it’s maligned business practices. Judging by Facebook’s recent negative media attention, from Mark Zuckerberg’s less-than-convincing congressional testimony, to the media pointed interviews, to the mocking memes showing Zuckerberg for the duplicitous political actor he is, it is clear that the truth is getting out about Zuckerberg and his platform. Yet, many people continue to stay with Facebook, content to complain, but not much else. After all, it is where everyone already is, right? Facebook enjoys a virtual monopoly, and has developed an easy to use and enjoyable platform. Even if they do suppress our particular point of view while promoting anti-freedom and pro-left policies with no sign of anything different on the horizon, better the devil you know.

It occurred to me that this situation is much like the struggle for Texas Independence. Some assume that when the people of Texas become upset enough at the overbearing and intrusive status-quo of Washington, realizing that nothing will really change except the rhetoric, they will insist on independence. However, even a dirty, torn, security blanket still holds some psychological comfort (if not actual comfort). So, sometimes, no matter how badly we may need a certain radical change, taking that first step is the most difficult. Though many may say they like the idea of Texas calling its own shots, they still maintain that “It’ll never happen,” or that “They won’t let us go.” However, where there is a will, there is a way. And if the concept that governments rule by the consent of the governed, removing that consent is the implicit consequence of an out-of-control federal government.

A month ago, Zuckerberg probably would have laughed if you told him he would soon be losing $10 billion in a week. But it happened. Now he has to work to convince people that competing social media platforms are not worth the switch; that Facebook will do better, just look at their updated privacy policy. And the censorship thing? Gross misunderstanding. It will all be ok. Just hang in there. All the while, he doesn’t want you to recognize that he’s said things like this before.

Do you believe him this time? Do you trust him? What if you do roll the dice on Zuck and find out later on that it’s more of the same? Will you then leave or stay?

It’s the same sort of issue with the federal government. Washington runs a virtual monopoly, and even though there are legal alternatives, most don’t even like to talk about them, as we’ve been conditioned not to. Instead, we bank on reform. However, no matter how much energy and money we put into reforming Washington, nothing substantial seems to change, no matter who is president or running congress. And while Texans can admit that we would likely do better on our own, we cling onto that moldy old blanket and double-down on the belief that this election year will be the one that changes things. By grasping at comfort, we may not only be missing on out on a much better situation, but we are risking the loss of what we have already.

Change can be difficult and even a bit scary, but change is coming whether we want it or not. But once you make the difficult decision and trust that you know best how to run your own life than anybody else, there’s a certain peace and a more sure hope that things actually will be OK… Better than OK. The world nor the USA will not end just because Texas reasserted herself as an independent nation, or if Facebook has real competition in the realm of social platforming. It actually will likely be better for it.

So take the risk. Go ahead and #FaceExit. Talk with us on MeWe in the  Texas Nationalist Movement group. Learn what you can do to advance #Texit and make the world a better place. Being a part of Facebook or the union of American states is not as necessary as we are lead to believe.