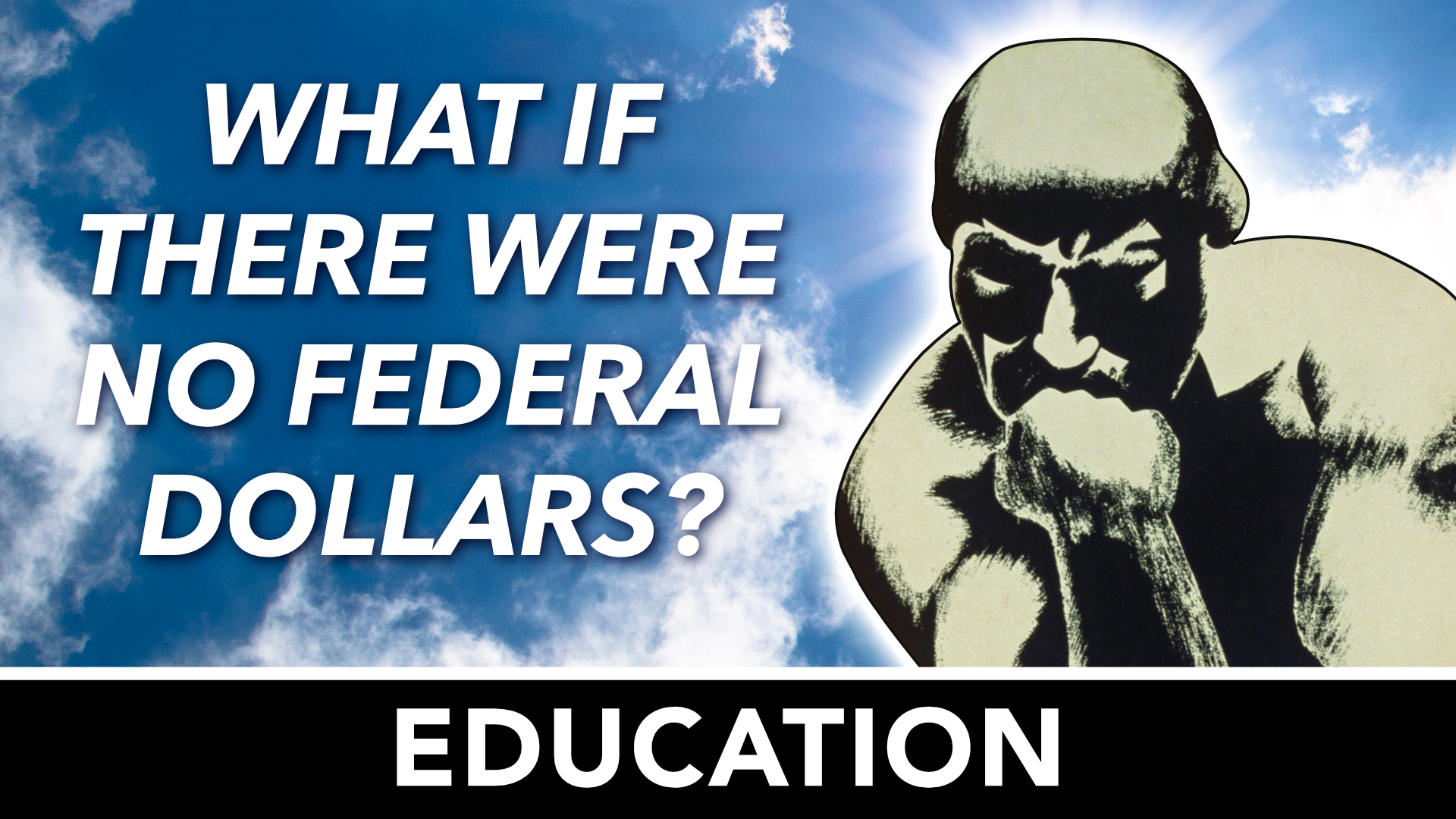 One of the biggest points of fear mongering regarding Texit is a series of questions about “what if there were no Federal dollars?”  Dr. Beverly Alford breaks down what an independent Texas higher education system could look like without federal funding, which always comes with strings attached.

Texian Partisan has outlined multiple reasons why a divorce from the United States is critical for a free Texas; the ruinous effects on higher education by an interfering federal government provides additional rationale to hasten a permanent separation between Texas and the United States.  Federal interloping on Texas college and university campuses has not only increased the price of degrees (even as degrees continue to lose value), the ideological impact of progressivism in academia continues to hinder the interconnected and collegial nature of college campuses—once considered bastions of open-mindedness and varied thought. Never before has the federal government been more involved in decisions in which it has no place.

Federal Government has Forgotten its Role

Per the U.S. Constitution, public education in the United States is decentralized. The federal government has no direct authority over education in the U.S.; in truth, the word “education” does not appear anywhere in Constitutional text. The Tenth Amendment states any powers not specifically given to the federal government will be granted to the states and the people. It follows therefore, that education is a state and local matter.

Nonetheless, according to the U.S. Department of Education’s website, one of the department’s chief roles is “exercising leadership in promoting educational policies and reform efforts of national scope.” Despite education not being mentioned in the Constitution, there’s an entire Federal agency devoted to the subject. The federal government exerts control over the higher education system by exercising its powers to tax, spend federal funds, and regulate intellectual property. As colleges and universities become increasingly reliant on federal funding, the U.S. government’s power over higher education continues to become stronger and more deeply-entrenched.

When the Texas Higher Education Coordinating Board (THECB) was created by the Texas Legislature in 1965, it seems TEXIT was on their minds, whether legislators realized it or not! THECB’s mission, after all, is “to serve as a resource, partner, and advocate for Texas higher education, resulting in a globally [not federally!] competitive workforce that positions Texas as an international leader.” Most statutes applicable to the THECB are found in the Texas Education Code, Title 3, Section 61.

The largest portion of the Texas Legislature’s Higher Education appropriation is General Revenue—income raised from state sales tax, franchise taxes, and numerous other sources. In addition, the Legislature appropriates to institutions revenue derived from tuition and other education and general sources. The sum of the General Revenue Funds, Federal Funds, General Revenue-Dedicated Funds (predominantly local educational and general funds), and Other Funds (e.g., tobacco funds, constitutional funds, etc.) is called the All Funds appropriation.

Not all funds available to Texas institutions of higher education are appropriated by the Legislature. Institutions also derive revenue from: designated tuition (set at each institution by its governing board); fees that do not flow through the appropriation process; and revenue from auxiliary enterprises (e.g., intercollegiate athletics, bookstores, dormitories, research grants, other activities). Public community and junior colleges have other sources of revenue (e.g., local property taxes) outside the appropriation process.

During a time when student loan forgiveness has become a pivotal issue on the federal stage, the justification for exorbitant financial aid monies is being closely scrutinized. The Mercatus Center at George Mason University states students at U.S. universities suffer higher costs (e.g., increasing tuition) and debt burdens because of expansions in federal aid, not despite it. Additionally, the Heritage Foundation states the surest way to stop the sharp rise in both college tuition and student debt is to get the federal government out of the business of education and student loans. Such a move would immediately cut off the seemingly unlimited amount of money that has allowed colleges to increase costs without limit.

In addition to the economic pitfalls inherent in federal interference in higher education, quality suffers when government becomes involved. Upon graduating from institutions of higher education, more than one-third of today’s students fail to gain skills related to critical thinking, complex reasoning, and writing. The Heritage Foundation found many students who graduate are ill-prepared to earn a living and repay the crushing debt they accumulate whilst earning their degrees. What’s more, 40% of students who start college do not finish within six years.

With higher education’s increasing costs and stagnating payoffs, it makes theoretical and practical sense for Texas policymakers to support and encourage applied opportunities such as apprenticeships, on-the-job training, and vocational education, rather than urging Texans to shoulder the burden of devastating student loan debt. On balance, the best way for Texas students to learn how to most effectively work in and for Texas is through actual tutelage from other Texans.

The socialist zeitgeist that’s materialized in and around U.S. institutions of higher education has created hostile atmospheres for Texans who don’t conform to the leftist dogma that’s engulfed colleges and universities. Students (and professors) on campuses across the state find themselves immersed in environments that foment identity politics—often pitting Texans of different backgrounds against each other—rather than fostering our shared love for Texas.

One of the best ways to confront the current mindset that’s overtaken institutions of higher education is for Texans to reject the aforementioned “leadership” and “promotion of educational policies” by the U.S. Department of Education. An independent Texas directly challenges the overwhelmingly socialist mentality all too emblematic of folks running our colleges and universities. TEXIT offers a seat at the table for a range of principles and ideologies, including such fundamental concepts as freedom, free markets, and limited government—ideas that are currently eschewed on most campuses.

Federal interventionism in higher education stands in direct opposition to the liberty Texans hold dear. An overbearing, bureaucratic government fosters unquestioning compliance, herd mentality, and a dependency on unquestioned authority. Texas is unique—historically, culturally, and economically. We expect more from our colleges and universities than a one-size-fits-all prototype that fails to fit Texans. Only a free and independent Texas will inspire and sustain individuality, innovation, curiosity, creativity, and overall excellence.