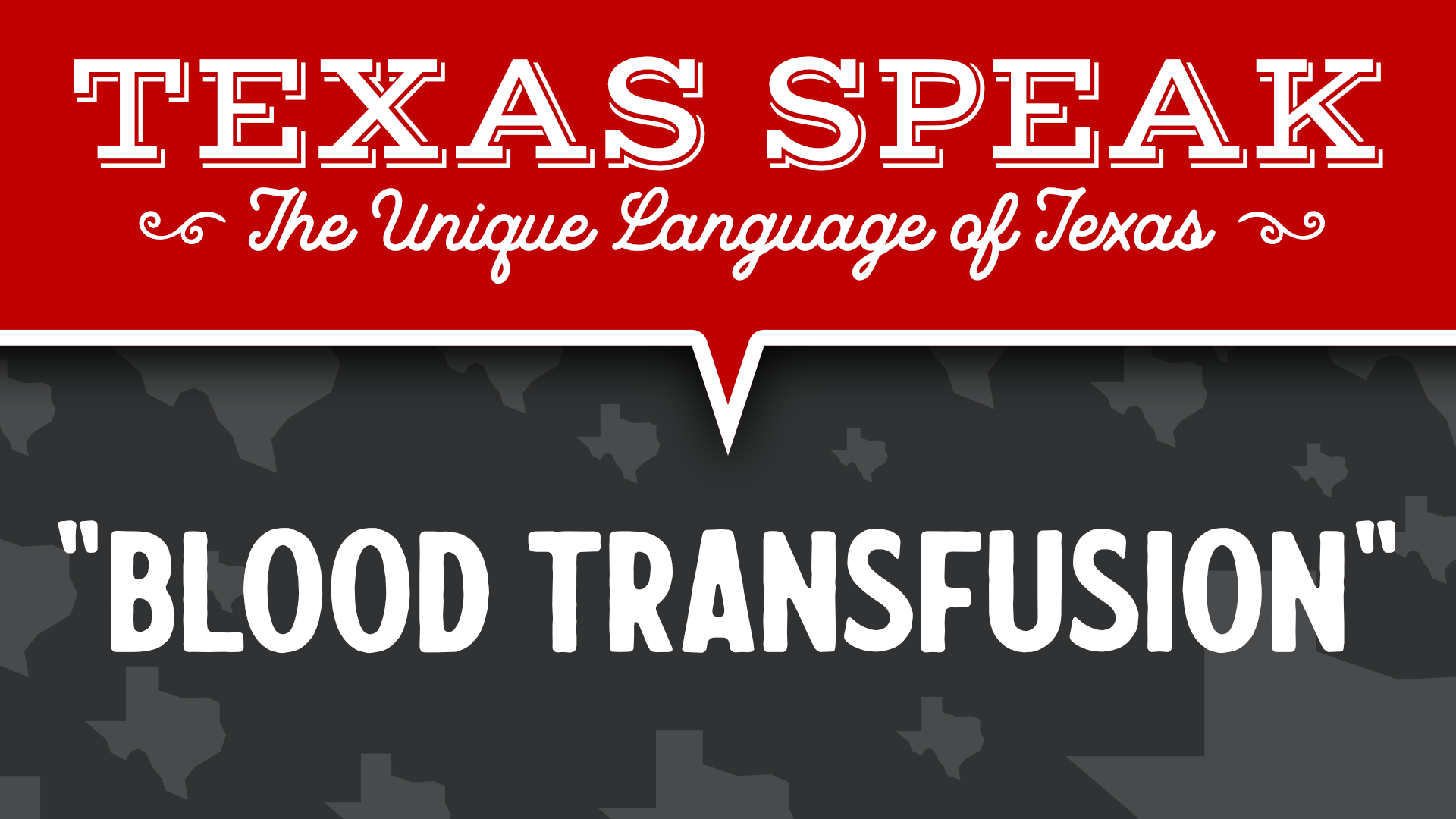 Imagine this terrible scenario: you find yourself in dire need.  You’re injured or ill, and the prognosis is poor.  Your doctor comes in and says that he can save your life by giving you a blood transfusion.  Someone previously donated blood, and the doctors will add that blood to your system, thus saving your life.  If nothing else, we see this on TV all the time, right?

Folks who are scared of self-determination often throw around the idea that Texas cannot be economically self-sufficient without Federal dollars.  They say we’re ill, or injured, and cannot survive without life-giving dollars “donated” to us by the experts at the Federal government.  In their mind, only Federal dollars judiciously applied can save Texas’ economy and government from certain death.  The “blood transfusion” metaphor gives some interesting insight.

First, is Texas really “sick” so that it must have a “transfusion” of Federal dollars to survive?  Given that our GDP ranks 9th in the world as a state, it’s hard to make the case that we don’t have enough economic resources.  The Partisan makes the case repeatedly in our Friday “no Federal dollars” series that in every area imaginable, Texas can easily replace Federal funding by a combination of responsible priorities and lower spending, without raising taxes beyond the burden of the current combined state and Federal tax rates.  The argument that we “couldn’t survive” without a “transfusion” of Federal funds doesn’t really hold water.

Next, where do Federal dollars come from?  When you’re sick, you can’t donate your own blood and then donate it back to yourself to save your own life.  What you can do is donate your blood in advance when you’re healthy for use later when you’re sick.  Or more commonly, well people donate blood and it’s used to help the sick.  In our transfusion metaphor, if we were sick and needed blood, we’d have two options: having already donated in the past, we could use our own, or having not donated in the past, we could use someone else’s.

All Federal dollars come from the states or their citizens.  I’d go so far as to say that there are no “Federal dollars” at all, only state and individual funds held hostage by the Feds.  So when they say that Federal dollars are the transfusion required to save our life, where did that money come from?  From us!  They’re not giving us some miraculous gift, just returning what was already ours.

But is the Federal government a “good doctor?”  Do they only give out “blood” to people who really need it to survive?  It would be hard to justify the idea that the current Federal government only gives money to “save lives” of people and places in need.  No, the current system is to throw Federal money indiscriminately at every single problem.  This strategy is more like the medieval “blood letting” with leeches, where the same ineffective technique is used for every illness.  What the Federal “doctor” prescribes isn’t likely to be helpful!

Let’s give them the benefit of the doubt for a minute and assume that if a state was in dire need, that the Federal government would be able to “prescribe” its dollars (that they got from us to begin with) to save our life.  Do they treat our dollars as life-giving blood?  No they don’t.  Instead the Federal doctor takes a pint of blood from Texas, spills 20% on the floor, gives 40% to other people, takes 10% to support himself, gives you the remaining 30%, and THEN claims to have saved your life!

In this article:featured, federal dollars, Texit