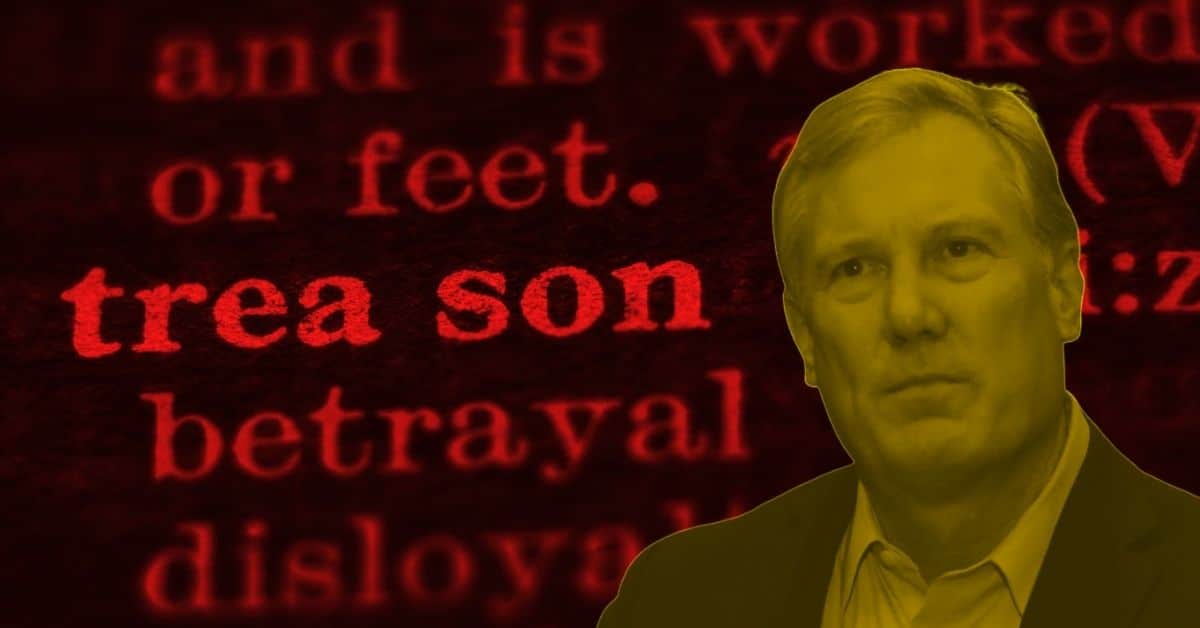 Politicians and the media have been using fear-mongering tactics to try to prevent people from supporting TEXIT. One of their chief claims, that TEXIT is treason, doesn’t survive the slightest scrutiny.

State Representative Travis Clardy called us cowards, saying that Texit supporters “want to break and run” from the Union just like those at the Alamo who “crawled over the wall that night.”  Just a few days ago, an article in the Business Insider equated the pursuit of independence with domestic terrorism, utilizing alarmist notions of civil unrest, violence, and civil war.  Smear campaigns and fearmongering date back to the earliest of times because they often prove effective.  Why?  Because too many people believe the first thing they hear and seldom question or investigate what they heard to ascertain the truth.  And this is no surprise, for centuries ago Solomon wrote: “The man who states his cause first seems right until the other comes and examines him” (Prv 18:17).  As Texans, we must hold the political leaders’ and all media’s feet to the fire and demand an accurate assessment of the Texit proposition.  We must ask for truth instead of the inflammatory sensationalism that masquerades as truth these days.

With this in mind, we turn to an event that occurred during the recent Republican Party Convention in Ellis County.  When a proposition in favor of a Texas independence vote was being discussed, a vocal dissenter leveled the accusation of treason against those who were in support of our self-determination.  “Treason” is a strong word to just throw around, especially when coupled with the fact that the violation thereof carries the death penalty.  It seems reasonable that we should define and understand its meaning.  According to the United States Constitution (Art. 3, Sect. 3) and the Texas Constitution (Art. 1, Sect. 22), treason “consists only in levying war…or adhering to …enemies, giving them aid and comfort.”  Notice the word only in both documents.  Unless TEXIT supporters wage war or offer aid and comfort to enemies of the State, then the act cannot be properly or legally classified as treason.  To accuse TEXIT supporters of treason indicates that the gentleman from Ellis County does not understand the issue or the definition of treason, or that he intentionally attempted to incite the passions of the people by maligning his opponents.

With his misuse of the word, based upon his faulty definition, the gentleman inferred that the desire to reestablish independence is a crime.  In fact, Noah Webster stated that “treason is the highest crime of a civil nature of which a man can be guilty.”  So heinous is treason – it carries the death penalty – that, according to this writer’s knowledge, it is the only crime specifically defined in the Constitution.  Given the history of despots to wield an accusation of treason like an assassin’s blade in order to discredit and execute their enemies, the framers of the Constitution stripped the abusive power from the tyrants by placing strict limitations upon its definition and the terms under which a conviction may lawfully occur.  Now, all agree that treason constitutes a crime.  However, does petitioning for a vote for independence constitute treason?  Apparently, the gentleman from Ellis County believes so.

The Declaration of Independence articulates the mind of the Founding Fathers on this matter by saying: “whenever any Form of Government becomes destructive…it is the Right of the People to alter or abolish it…and to institute new Government…”  These men clearly believed that breaking away from the British monarchy was both necessary and moral.  To King George, such a decision was treasonous, and the punishment was death.  Santa Anna took the same position toward the Founders of Texas and he also implemented the penalty of death.  No American, or better yet, no Texan, would hold in contempt or condemn the Founding Fathers of the United States or Texas for their action to “breakaway,” as Representative Clardy put it.  Today, true Americans and Texans hold these men in great esteem, and thank God they had the courage to resist.  As Alexandre Dumas quipped, “The difference between treason and patriotism is only a matter of dates.”   History is written by the winners after all, and many times today’s “traitors” are tomorrow’s “heroes.”

Thirteen years after declaring independence from Britain, the same generation of men replaced the Articles of Confederation with the Constitution – thus abolishing the preceding form of government – and therein defined the crime of treason.  Apparently, the Founders took the position that breaking away from a despotic government, and then changing their own form of government, did not qualify as treason.  Yet, almost two-and-a-half centuries later, the gentleman from Ellis County opened his mouth, applied his wisdom, and condemned retrospectively the Founding Fathers of the crime which they, themselves, defined. In so doing, the gentleman condemned Austin, de Zavalla, Navarro, Travis, Crockett, Bowie, Houston, and all who resisted the tyrant’s heel.

One cannot logically argue that calling for a vote to leave a Union that one voluntarily entered is treason.  Consider, when a man and woman get married, the union they enter is intended to be for life.  There are terms in this union that each expects the other to keep and to which they vow.  In the event that one breaks the terms of that union in a damaging and destructive way, then it is rightly understood by all reasonable people that the union can, without remonstrance, be dissolved.  (The Bible is rather specific on this point.)  To expect a wife to remain with a brawling, drunken, abusive, adulterer flies in the face of all logic.  Then, to berate her as though she was the disloyal one, call her a coward for desiring to “breakaway,” or lambast her as traitorous to her tyrannical husband is completely asinine.  Is not the principle of Texas and the United States parallel?

The “long train of abuses and usurpations” outlined in the Declaration of Independence pale in comparison to the blatant violations forced upon us by two-and-a-half million unelected federal bureaucrats.  We are compelled, by the threat of social ostracization, loss of employment, and/or incarceration, to accept policies that stink to high heaven.  We are taxed beyond the threshold of viability and forced to pay for programs and systems that go against our best interests.

True Texans and all freedom lovers absolutely despise this.  We are angry.  We are resolved.  We will tolerate no more the assaults heaped upon us by our domestic enemies.  For those who want to save America, we bid you Godspeed.  All we ask is that Texans may decide our own fate.  Let the United States morph into whatever they choose, but let Texas stand firm.  Let Texas lead.  Let Texas be free.  Mr. Clardy, the current generation of Texas patriots are not cowards. We sound and look like Texans who stole the cannon from Santa Anna and then thumbed their noses in his face with the Come And Take It flag!  These are the Texians who listened to Deguello, knowing full well the fate awaiting them in defeat.

So, to the gentleman from Ellis County, you choose to call us traitors, guilty of treason – a crime punishable by death.  What, then, do you call those who violate us daily?  Friends or enemies?  Traitors or patriots?  You are free to disagree.  This is what freedom is all about.  Yet, perhaps, you should check your words before leveling false accusations against the honorable people of this great State.  We will stand up and be counted.  We have crossed the Line in the Sand, and stand in favor of Texas. Join the Texas Nationalist Movement now.  Cross the line with us and make Texas stand among the nations once more.