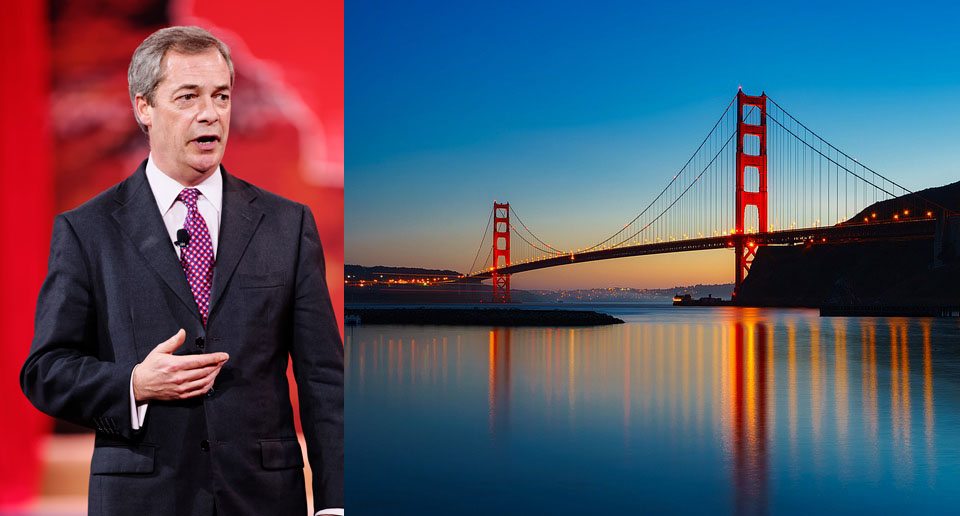 Calexit may have just gotten a big boost by those who brought Brexit into reality. Now that Brexit is a certainty, former United Kingdom Independence Party leader Nigel Farage and cohort Arron Banks have turned their sights to changing the borders of California.

The two recently visited California and help raise one million dollars to split California into two states: the liberal western California, and a rural eastern state that would presumably vote conservatively in future elections. “It would be portrayed as the Hollywood elites versus the people, breaking up the bad government. Seventy-eight per cent of people in California are unhappy with their government. It’s the world’s sixth largest economy and it’s very badly run,” stated Banks. Banks’ goal was to teach Californians “how to light a fire and win’ the Calexit referendum.”

Over the past few months, multiple “Calexit” strategies have been discussed:

While Farage and Banks have opted for the second option, it is quite likely that the move to convert California into two states would help spur and otherwise legitimize the overall Calexit movement, as well.

For Texans, however, there is more to this story that meets the eye, if we examine history and current events carefully.

Historically speaking, the notion that a state can spin off a satellite territory is well established. The first example is the creation of Maine, which until 1820 was part of the Commonwealth of Massachusetts. In this case, Maine held multiple referenda for independence which were ignored by Massachusetts until the summer of 1819, at which point Boston agreed that Maine would be spun off as a US Territory as long as the United States Congress agreed to statehood by March 4, 1820. Note however, that while statehood can only be granted by congress, states apparently have the right to “divest” territories of their own volition. In other words based upon this precedent, while the State of Eastern California would need to be approved by Washington, Sacramento could spin off the US Territory of Eastern California tomorrow.

West Virginia is another example. In this case, West Virginia seceded from Virginia without the consent of Richmond in 1861, and was admitted into the United States as an act of Congress in 1863.

Texans might thus pay close attention to these examples, and indeed to the events unfolding in California. However there is at least one other ongoing movement within the territories of the United States that could play a crucial role in the future independence of Texas and possibly California: the Puerto Rican Referendum. In fact, on June 11, Puerto Rico will hold a referendum that will give its people two choices: statehood or independence. Note that this independence referendum is taking place this year, in the United States. Where’s the outrage, you might ask? Where are they on Puerto Rico, all those who previously screamed that Texas and/or California did not have the legal right to leave the United States?

Frequently, the oft-debunked legal argument against Texas independence is that states are indivisible (a term not found in the constitution). However, states can and have spun off territories without the consent of congress. And since we have ample evidence that territories can likewise become independent, then objections against independence become less legitimate and more wishful thinking. The simple fact is that the people retain the right to chose their own government; it was true yesterday, it is true today, and it will be true tomorrow. And when it comes to joining or leaving a union, consider this: you might need a person’s permission to enter their house, but you don’t need it to leave. So, whatever California or Texas decide, that’s how it will be! So sorry, Washington.