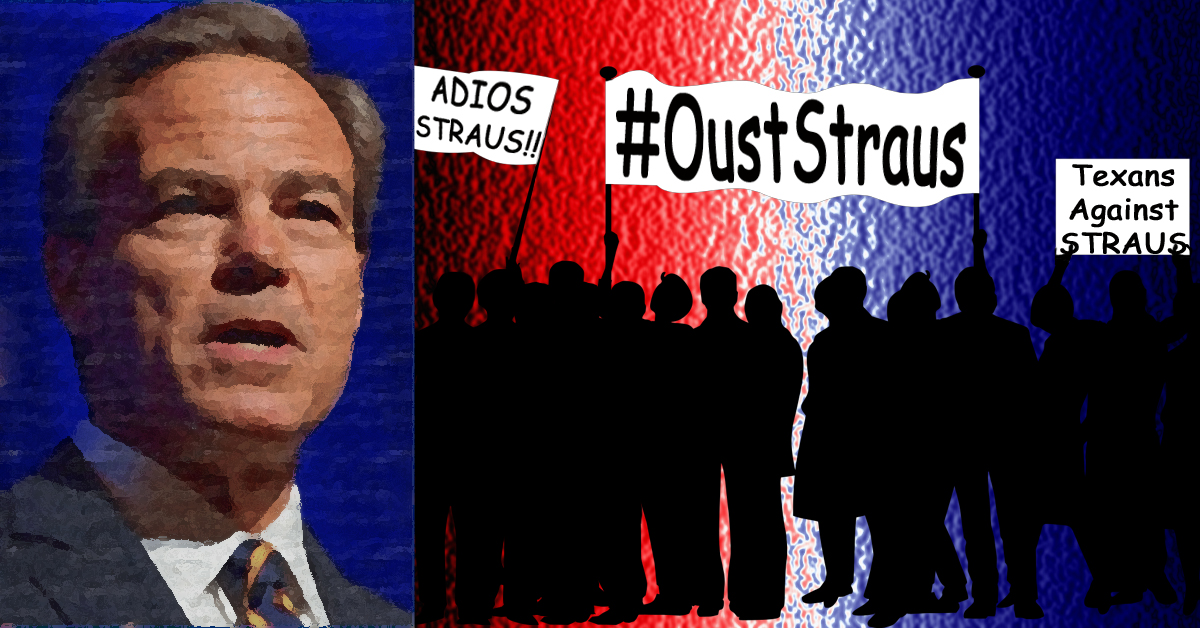 In the latest development in the movement to remove  Joe Straus as Speaker of the House, during last night’s Bexar County GOP CEC meeting, there was an attempt to initiate a censure of  the local Texas State Representative.

According to those there, this was no small group. In fact, it may have included as many as two-thirds of the precinct chairs, looking to vote on this resolution, presumably concerned over the actions of Straus to stymie and stop conservative legislation from receiving an up or down vote in the House.

Although it seemed that the oust-Straus crowd had the momentum, known Straus-ally Robert Stovall controlled the chair, and by hook or by crook, this chair wasn’t going to allow any censure resolution to move forward. Jack Dubose, Real GOP Chair, was in attendance during the night’s proceedings. According to his Facebook page, this is what happened:

The room was packed. It was apparent the members came to vote on a proposed censure resolution and it was obvious the votes were there to pass said resolution. But the Bexar County Chairman had other plans and was determined NOT to allow a vote. He announced he had replaced the Parliamentarian. On adoption of the agenda a call to amend agenda ensued and was ruled “out of order” by the Chairman. Then several “points of order” went unrecognized. The Parliamentarian said nothing. Many floor objections were simply ignored. The Parliamentarian said nothing. The Chairman threatened to clear the room of those asking to be recognized (I’m guessing too forcibly or too often?) declaring them “disruptive”. When the Parliamentarian did finally speak to the issue he chastised the body for too many “points of order” or at least that’s the way I interpreted it. I haven’t seen that rule before. It was announced that a special committee had written the agenda and could not be changed.

In the end, the resolution was defeated through ignoring it. And while (at best) highly irregular and (at worst) against the rules, it didn’t seem to matter to the chair. Stovall then made a motion to adopt the agenda and then dubiously claimed it had passed during a voice vote (an old political trick). When a “call for division” was made, e.g. initiating a tally better than a voice vote, that also went ignored. According to DuBose, “It was also announced a resolutions committee was formed to hear proposed resolutions outside the CEC and rules were established to govern the process WITHOUT a vote by the CEC. This was done obviously in an attempt to circumvent the proposed censure resolution.”

Last night’s railroading of the CEC dissenters may have delayed Straus’ reckoning, but it is unlikely to have suppressed the movement against him for more than the short-term. In fact, it may be the political equivalent of kicking a hornet’s nest. In addition to the opposition of Straus, now, because of last-night’s sham of a procedure, some GOP chairs in neighboring counties (including Real and Atascosa) have called for Robert Stovall to step down from his position in Bexar. And remember, all of this discord and division is the result of the attempt to protect the un-Republican actions of one man: Joe Straus. Is he really worth it? Is it worth corrupting the democratic traditions of this body,  a reflection of the parliamentary corruption that Straus himself perpetrates in the Texas House, just to stave off the inevitable for a bit longer? For those in power may succeed in grasping it for a time after the People have removed their consent, but their tenuous control rarely lasts long, and their craven efforts are rarely forgotten.