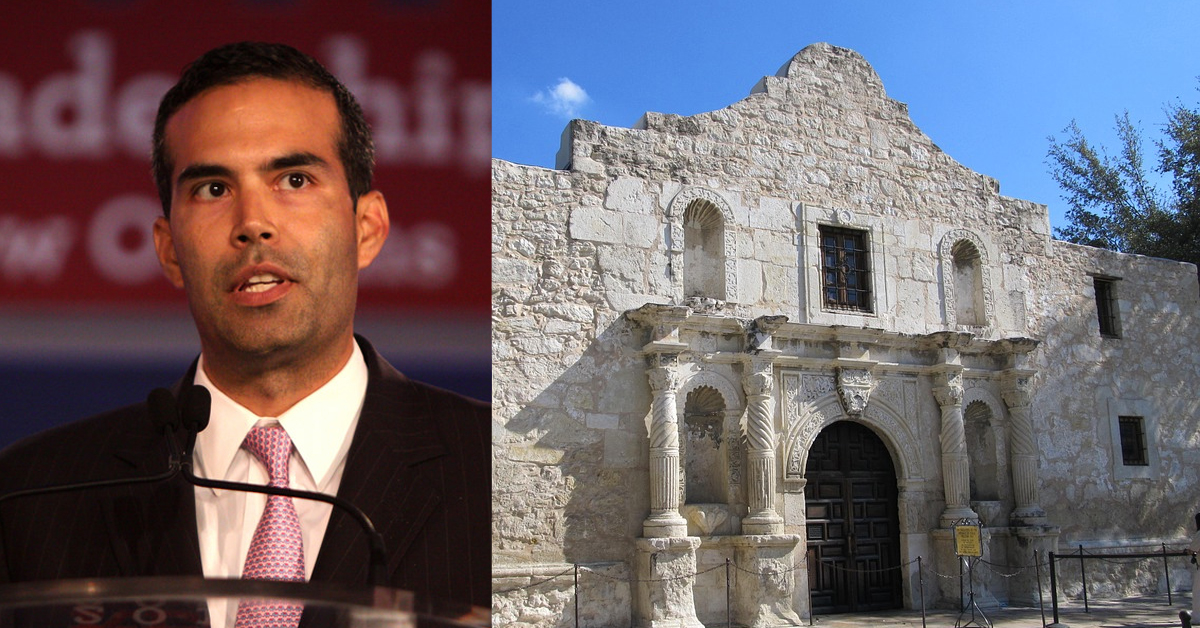 In true political fashion, Texas Land Commissioner George P. Bush has changed his publicly stated opinion regarding the transformation of the Alamo site without recognizing previous statements. Recently, Bush granted an interview with Michael Quinn Sullivan, President of Empower Texans, and Quinn posited a number of direct questions to the Commissioner regarding the “Reimagine the Alamo” project.

Bush now states that the intent of the project can be reduced to three goals:

Bush repeatedly stated that the focus of the restoration will be on the 1836 battle and the recognition of the brave Texians who gave their lives for the Republic. He also said that he wished to see an end to the “carnival atmosphere” of the shrine, and indicated his desire to work with local businesses and the City of San Antonio to see an end to the peddling of wares so near the site of the massacre.

Bush said that he now supports the Texas Republican Party’s September resolution requesting that the General Land Office commit to financial transparency for the project. Bush went even further and suggested that the board of the Alamo Endowment was already fully transparent.

Finally, Bush said multiple times that “under his watch” the Cenotaph would continue to stand, either at its current location or perhaps at the new entrance of to the Alamo complex. He said that the Cenotaph would only move to a “more prominent or deferential position.”

It is unclear whether Commissioner Bush has had a change of heart, been radically misunderstood, or is just telling us all what we want to hear. Nevertheless, Jennifer and Angie Calley, descendants of John H. Dillard, left nothing to chance and wrote an eloquent appeal to save the Cenotaph:

We are descendants of John H. Dillard, Rifleman from Tennessee. As descendants of a defender of the Alamo, we would like to plead with those in authority, to reconsider their proposal to move the Cenotaph.

This beautiful memorial not only represents our Texas heritage, but it is a reminder of the brave men who fought and gave their lives for our independence. It is as others have said, “where our ancestors died, and it is our families’ headstone.”

We cannot imagine being those approximately 150-200 men inside the Alamo during this battle. Picture yourselves for 13 days, looking out over those mission walls, seeing Santa Anna’s army, which numbered in the thousands, and realizing the ultimate outcome. Would we have been brave enough to stay within those walls and fight until the bitter end or would we have chosen to throw up the white flag and surrender? These men believed in their cause and they were willing to fight to the death to benefit future generations.The Alamo is not just a mission and the cenotaph is not just a statue. They are both symbols of our Texas heritage and serve as a reminder to future generations of Texans, that our independence came with a cost. It gives a face to the names, it gives recognition to those who perished, and it honors their bravery. Let us not disturb this sacred battlefield, our “families’ headstone,” nor their memory.

It is now our turn to say, “Remember the Alamo!”