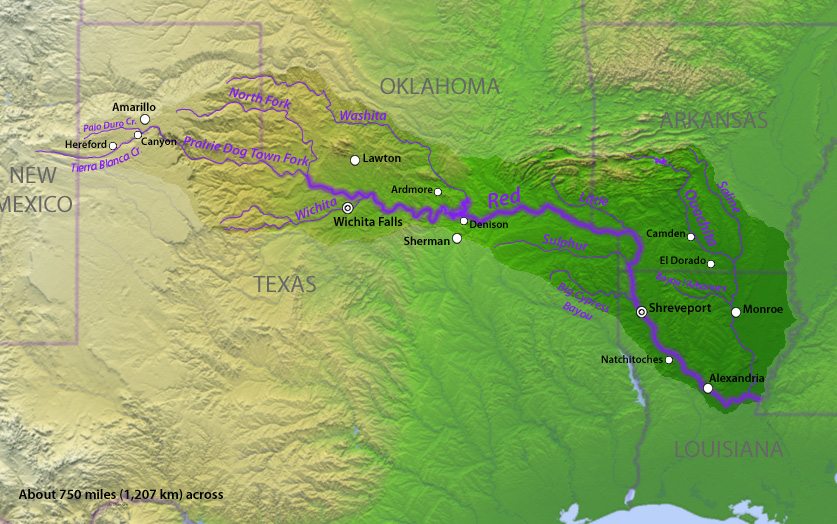 According to an article by Cristina Corbin, the Bureau of Land Management had been looking for new areas to assign allotments. In this case, allotments refer to the divvying-out of tribal lands to Native American tribe members, whose domain is located on the opposite bank in Oklahoma. To this end, the BLM decided to use the determination of a Bush era Red River survey, one that had concluded the river had somewhat shifted over the last 100 years, as an opportunity to appropriate a sizeable amount of land on the Texas side of what has been considered the legal boundary between the two states.

The land-owners have filed suit against the BLM and the Department of the Interior, disputing the federal government’s claim to land that was long ago deeded to the owners by Texas. Adding to this effort is US Senator John Cornyn and US Representative Mac Thornberry, who have already submitted a bill to deal with the situation. Hopefully they will be able to restore the borders to where they have been recognized since Texas became a state, as well as restoring the property rights of the land-owners. Even so, the fact that this happened at all should be deeply troubling to every Texan. Instead of working with local and state authorities (not to mention the private land owners) as they should have, the impression left is that federal agencies take from whom they want, telling the former owners to deal with it, secure in the belief that as they’re untouchable agents of the federal government.

The outrages of Washington are numerous. The action on the Red River is only a small example of the slight-regard that the federal government holds for the rights of states and individuals. This begs the question of how many more federal thefts must occur before Austin sends DC packing. Does the President have to grab up the Governor’s mansion for a national monument before the our State’s executive and legislature realize that Texas is much better off without the Union? Here’s hoping that the Red River example will shock our politicians into action. The people of Texas deserve a vote, a choice between reclaiming independence or continuing in slavish deference to a federal government that constantly challenges the idea that its power over us has limits.