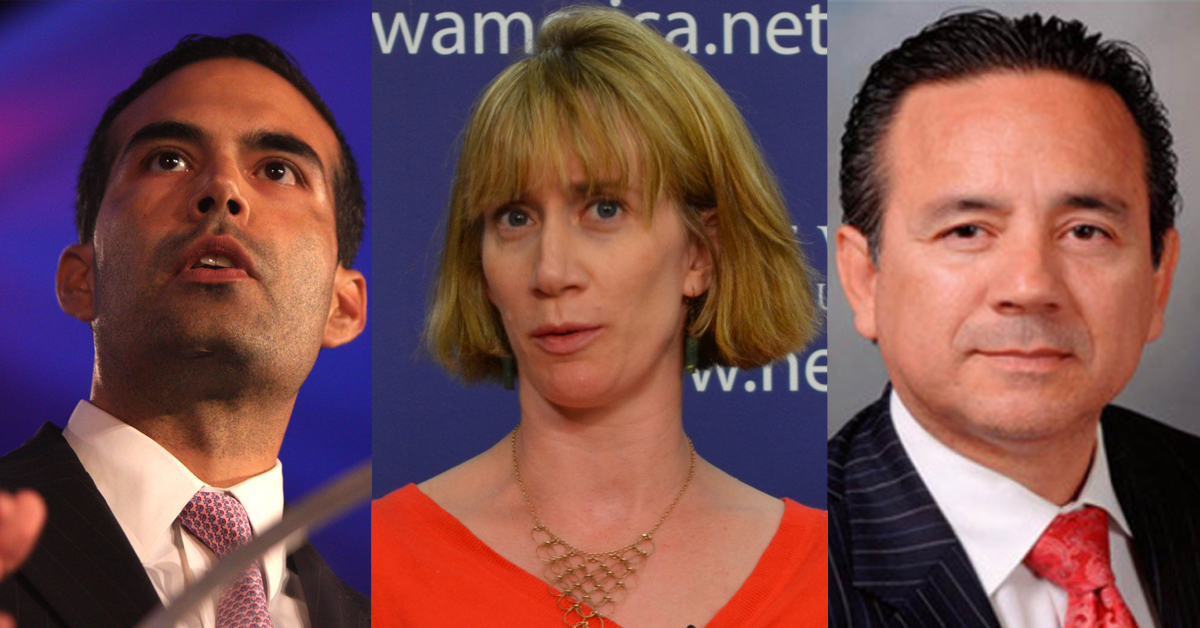 Right ahead of the March primaries, political news in Texas has become particularly busy. Unfortunately, this sort of news is rarely good, and in no exception to this rule, some Texas politicians are exposed in criminal corruption, malfeasance, dishonesty, and blatant opportunism.

On their website, the Democratic Congressional Campaign Committee recently harangued one of their own, Texas’ 7th U.S. congressional district Democratic primary front-runner, Laura Moser. The DCCC cast her as the sort that won’t “change Washington,” and, in what should be a supremely damaging quote, they also brought to light her comments to Washingtonian magazine, where she said that she’d “‘rather have [her] teeth pulled out without anesthesia’ than live in Texas.”

The document also criticized Moser for “begrudgingly” and recently moving to Houston while, for 2018, claiming Washington D.C. as her primary residence for a “DC Homestead Exemption.” Such a charge, if true, could bring her eligibility for that seat into question. Additionally, the DCCC accused Moser of keeping campaign funds in the family by hiring her husband’s consulting firm for $50,000, that’s “1 of every 6 dollars raised.”

These accusations will no doubt require some sorting, either in the court of public opinion or just plain court. However, for Texas voters, one of the more compelling aspects of this story may be Moser’s apparent carpet-bagging. It’s an old story, to be sure: ambitious politicians, who are openly disdainful of the people and land they’re bidding to represent, use some lucky state as a mere a stepping stone to fortune and political power. Sadly, in Texas, having politicians who think the definition of public service is really self-service is becoming more and more commonplace.

Readers of the Texian Partisan will be familiar with the disintegration of re-election campaign for GLO commissioner George P. Bush (Jeb’s son and Florida native), a candidate who has also been accused of being career-oriented, far more interested in the next thing doing a good job in the office they won. Adding to Bush’s many self-inflicted campaign wounds, Texas State Board of Education members David Bradley and Tom Maynard recently accused the commissioner of misleadingly taking credit in a mailer for contributing “‘over $4 billion to our public schools,'” while actually under-paying to the Permanent School Fund, “withholding $2 billion.” This, immediately after another campaign mailer falsely claimed the Bush was retired Navy.

Of course, what article about self-serving Texas politicians would be complete without a mention of the recent verdict in the trial of Texas SD 19 Senator Carlos Uresti? Both he and co-defendant Gary Cain were “found guilty on all charges in San Antonio federal court.” That’s 11 felony counts of criminal fraud for his involvement in the FourWinds scandal. Now, the honorable thing for Uresti to have done, for the good of Texas, would have been to months ago resign his office and fight the charges as a private citizen. However, that’s what an innocent and honest man would’ve done, one who cared more about the state they served than their own interests. Instead Uresti, a soi-disant Godfather holding sway over his lucrative little political fiefdom, fought tooth and nail to save himself and his career. To the last, he held out hope that by quirk of fate he’d beat the rap, maintain his status as a big-shot, and look forward to the next big thing. If Uresti’s a public servant, then the wolf is a shepherd. And even now, when it’s all over, while facing a probable lengthy stay at Club-Fed, Uresti still hasn’t resigned from the Senate. Classy!

As Texans, we’re used to jealousy and hatred from many in the Union; we expect scorn and ridicule from the politicians in Washington, who fancy themselves superior to us; and we certainly are aware that D.C. looks on Texas as a little more than a piggy-bank to feed the federal beast, a means to advance itself at our expense. However, is it too much to ask that those selected to represent Texas be cut from a different cloth? This March 6th, before you go to vote in your party’s primary, take a careful look at those competing for your vote. Consider carefully whether you believe they will serve the needs of the people of Texas or will just serve their own greed. Texas deserves better.