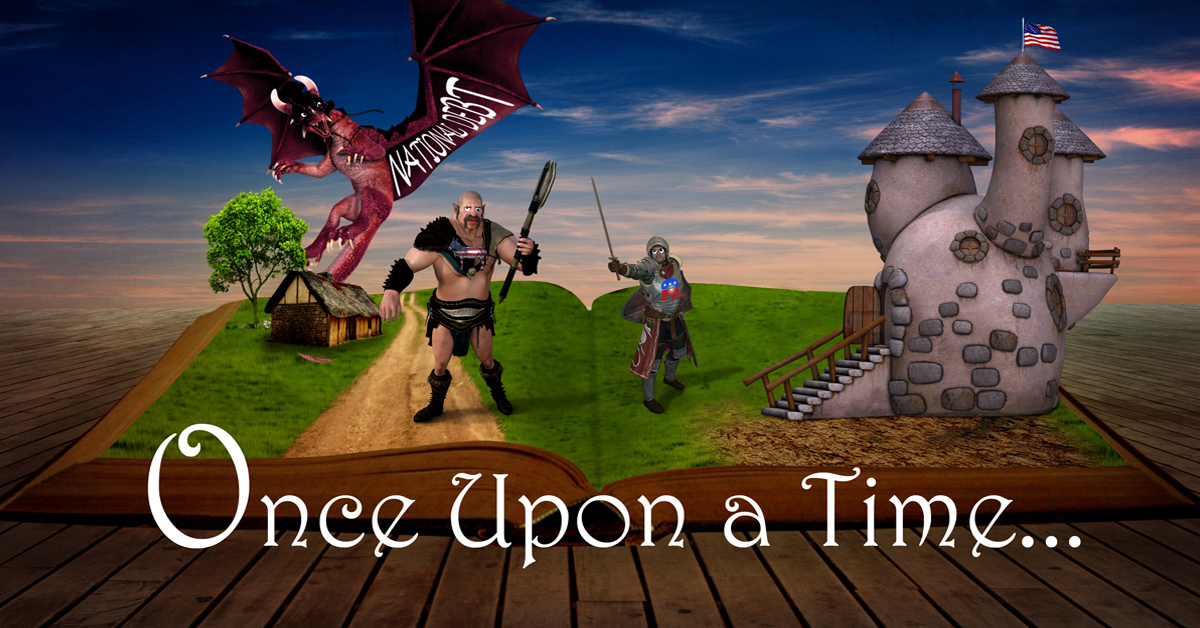 Let me tell you a story… Once upon a time, there was a magical order of knights called Republicans. These knights were brave, bold, and dedicated to the quest of vanquishing an evil dragon called The National Debt! That old serpent was crafty and strong, and known for glutting itself on the princes and princesses of the enchanted realm of America. Adding to the sorrows of the land, the dragon’s Democrat minions, vicious trolls who worshiped the bloated serpent, would sacrifice all to ensure that the dragon continued to feed and grow… and GROW! However, the Republican knights were swift and true, and at great risk to life (not to mention their careers as knights), they fought through the trollish hordes and slew the mighty drake, insuring that all the land would be free and prosperous for generations to come! The end. Good story, huh? It’s too bad it was only a fairytale.

Unfortunately, for all the story-telling Washington Republicans do at election time, they have not proven they have any more motivation to shrink spending and the debt than do the Democrats. Time and again this is shown to be the case. When the GOP is out of power, they rail against the imminent danger of the Union’s massive debt. When in power, the debt doesn’t seem to matter much anymore. “Don’t worry! It’ll be taken care of… someday. There are more important things, right now.” Well, like the song goes, “Someday Never Comes,” and with the latest spending free-for-all budget out the White House, it seems someday, even for Texas, has never been further away.

Far from being the slayers of the beast, the Republicans seem to have found a few more virgins to sacrifice to its hunger. According to an article from Daily Wire, this latest Trump/GOP budget is as bad as anything we’ve seen from the previous spendthrift President.

Why is this a problem? The same reason it was problem under Obama. Remember when Barrack was President, and how Republicans were adamant that something must be done about the debt? Good times!

If the U.S. keeps spending money we don’t have, then we’ll either devalue our own currency to support it or sell our debt to other countries and unions, ultimately giving them influence over Washington. Eventually (and that time is not too far down the road) just paying the interest on our debt will be difficult, maybe impossible. When that happens, we will default on our payments. And when that happens, then we will experience hyperinflation; the dollar will be worthless (meaning your savings), foreign investors will pullout, and we will experience suffering that makes the Great Depression feel like a walk in the park.

Of course, the usual suspects of the McConnell wing of the Republican establishment are down for this kind of spending. When Senators Rand Paul and Mike Lee last week stood-up for Republicans keeping their word on the debt, trying to amend the Senate’s budget deal to include some restraint, Senate Majority Whip John Cornyn (R-Texas) said Paul was “‘wasting everybody’s time,'” and said his actions were “‘grossly irresponsible.'” Even the sainted conservative, Senator Ted Cruz (R-Texas), the one guy that you thought got it, the lone politician that realizes the importance of taking a stand against further weakening the economy through additional accumulations of debt, even he reluctantly agreed to future obscene expansions of the debt in return for various goodies like “‘hurricane relief and restoring vital defense spending.'” I guess he thought his election-resume looked better running up the debt than letting his opponents say he hates Harvey victims. Oh, well.

You should probably get used to future betrayals as these, even from even Texas Republicans, because Washington changes a person. If it was a hospital, and the politicians were its physicians, their version of the Hippocratic Oath would be “At first, do as much harm as you like, just as long as you’re not on shift when the patient croaks.” In exchange military spending, or even further Hurricane Harvey funding, Republicans like Cruz, Cornyn, McConnell, and even Trump have effectively treated our cold by giving us cancer. If they were willing to fight, they could have at least got some of these things done separately, making sure they were paid for. But these are small details when you’re the boss. Besides, fighting for principle might get that tailored suit dirty!

“The hypocrisy is astounding. Every one of these Republicans complained about President Obama’s deficits.”

This was Rand Paul’s statement before the senate, and indeed he was correct. Texas has sent money and its best politicians to Washington to salvage and safeguard the rights and property of Texans. Unfortunately, they have all failed. They’ve all succumbed to the power of the ring and become the beast they were meant to slay. If Texas doesn’t want to be next on the beast’s menu, to see her prospects become a barren waste, her future lost, and her resources squandered, Texas has to give up the fantasy of a Washington solution and save herself. Texas independence, before its too late.