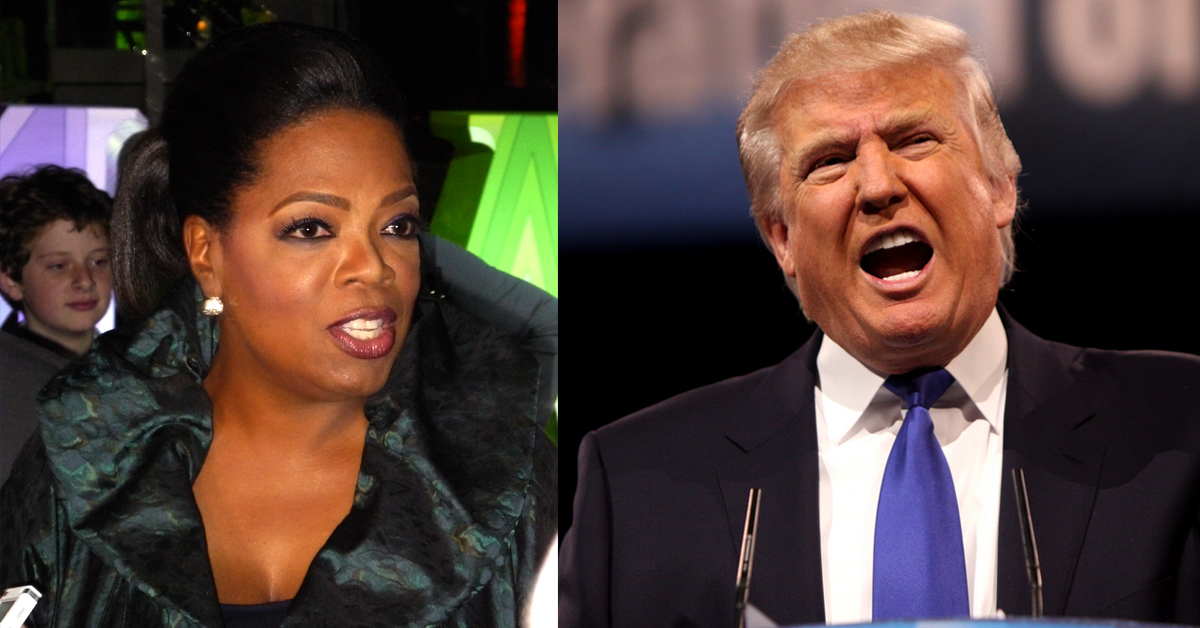 Photo element A by Greg Hernandez, and B by Gage Skidmore (No Endorsement. https://creativecommons.org/licenses/by-sa/2.0/)

Following her “speaking your truth” speech at the Golden Globes last night, the media is abuzz at the prospect of a President Oprah. GGA host Seth Meyers hinted at it, CNN is reporting that she is entertaining the idea, and that speech she gave is being treated on the same level as Obama’s seminal speech for the DNC. So, is it possible that we may be looking at the next U.S. President? Possibly.

In many ways, Donald Trump opened the door to this brave new world of celebrity Presidents. Sure, Obama was often thought that way, being heralded as presidential material almost immediately after being sworn in to the U.S. Senate; and of course there’s the film career of Reagan to consider, marking most of his professional life before becoming California governor; but both of those politicians racked up some political experience before becoming the chief executive. However you may view Trump as a person or a politician, his political inexperience before being sworn in as the 45th U.S. President is a fact. You might say that Trump had different experiences that qualified him as president, and there’s some truth there, however, the same argument could be made for Oprah. Plus, Oprah has had decades of sustained popularity that probably rivals Trump’s (expect a salivating media to run polls on this, any time now). Therefore, 2020 could very well be the year of celebrity vs. celebrity in the battle for 1600 Pennsylvania Ave., and all Oprah would have to do to best Trump is to perform a little better than the wildly unpopular Hillary Clinton did in 2016. Does anybody really think that this is impossible?

So, what sort of President would Oprah be? Well, I think it’s safe to say she would continue in the footsteps of Obama. Oprah was the first big supporter of the junior senator’s campaign, and has since been an ardent admirer and enthusiast for 44. It’s probable that she will pick-up where Barack left-off. Considering that the Democrats are favored to retake congress in 2018, she will find undoing the Trump legacy a fairly straight-forward affair. What little good Trump accomplishes in his four years (most of it done with the unstable powers of the executive) will vanish. That’s right! You’ll have a couple of years of unified Republican government and nothing to show for it, but an weak tax-bill. A President Oprah would likely continue to grow the powers of Washington, hike-up spending and debt, and we’ll all be left wondering “How did this happen?”

When Trump was elected, many of his supporters were caught up in the euphoria of the historic upset, declaring happy days are here again! Unfortunately, Trump’s election amounted to another half-measure to restoring limited government and individual Liberty, something that effectively kept people distracted from pursuing real solutions; quite frankly, it worked. The only way for Texas to find actual traction on solving our problems with a federal government out of control is to take control of our own lives, to re-establish our own sovereignty, to start focusing on Texas’ problems and not some pie-in-the-sky notion of restoring a defunct Union that doesn’t want to be restored. So, if you want to avoid a future under President YOU GET SOME DEBT, AND YOU GET SOME DEBT, AND YOU GET SOME DEBT, it’s time to get serious about Texit!