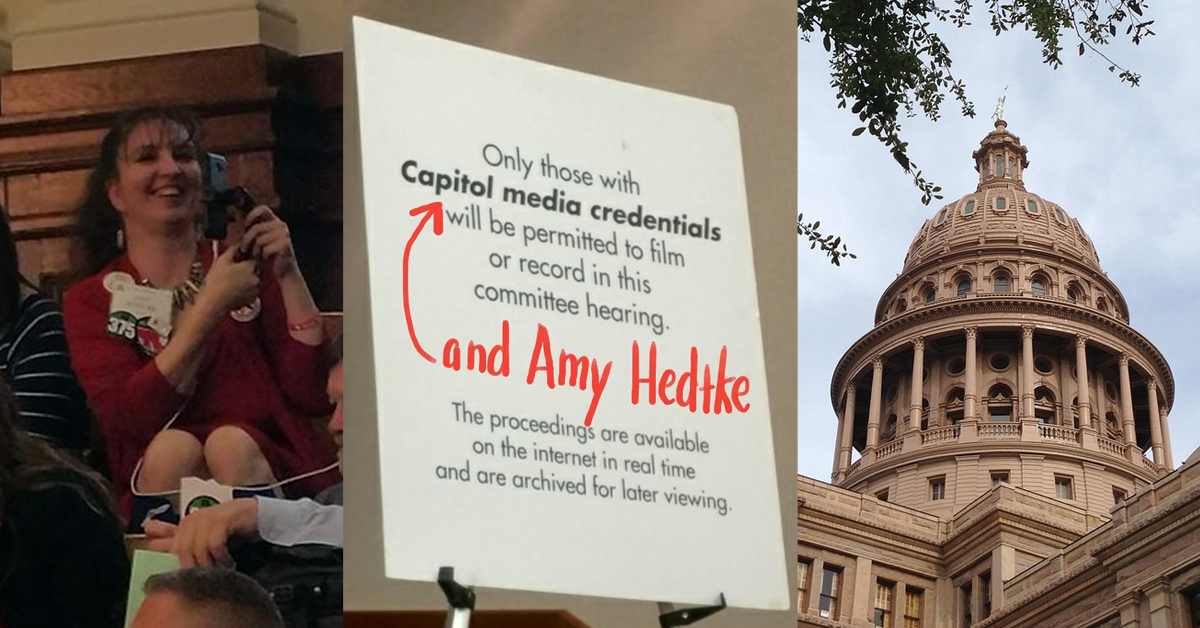 Regular readers of Texian Partisan will remember our story from a few months ago, about how Amy Hedtke was arrested, jailed, ill-treated, and charged with a variety of offenses for the crime of streaming an open meeting (you can read that article here). Under Texas law, she clearly had the right to do so. However, the meeting’s chair, Byron Cook, assumed that he had the right to lay aside Texas law at a whim. Well, this past Tuesday, a Travis County District Court Judge disagreed with the distinguished gentleman.

Represented by Warren Norred (Norred Law Firm) in this civil suit, Amy filed and was granted an injunction against Representative Cook and “all his agents from further interfering in the peaceful recording of his committees by the use of Facebook or other means.” Thanks to Judge Lora Livingston, Amy can, at least until this goes to trial, stream any open meeting that Cook’s conducting, no matter what signs are posted! 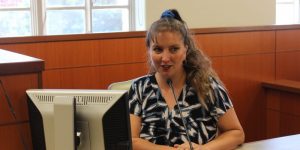 Although Amy had some substantial establishment adversaries backing the defendant, it is also worthwhile noting she had a pretty big ally in the form of the Republican Liberty Caucus of Texas. Their attorney filed an intervention on Ms. Hedtke’s behalf, saying that they stand with her and furthermore, their organization would be disadvantaged as well if the court did not find in Amy’s favor. Also, when this goes to trial, the RLC will be arguing alongside Amy, submitting the constitutional arguments not raised by Ms. Hedtke’s lawyers, such as that the capitol media credentials rule effectively creates different classes of citizens.

Unfortunately, this injunction doesn’t apply across the board and is limited to Amy and the defendants involved in the suit. However, Amy remains cautiously optimistic as the trial date of October 16th approaches, saying that “this is such a clear freedom of the press issue and a citizen’s right to record their government in action issue.” “This should be a slam-dunk!”

Also in good news, it seems that the legislature has largely given up this illegal exercise of control. According to Amy, the easels that stated recording is only allowed to government-approved journalists are getting scarcer. “I was able to go into the exact same room in John H. Reagan building where the last state affairs committee was that I was arrested at. There are no signs placed at all! There was no announcement made prohibiting recording! And everybody left everybody alone!” Amy added, “Nobody else has those signs up either.” Ms. Hedtke also mentions that the word must have gotten around to Senate, as signs there prohibiting recording have now been removed.

It’s nice to know that Texas justice still has some meaning, and it doesn’t just favor the powerful. Let's all wish Amy the best of luck with her upcoming trial, for freedom’s sake. And as Ms. Hedtke observed, as she encouraged other concerned citizens to start streaming any and all open-government meetings, that we should, “exercise [our] rights or [we're] going to lose them!”

If you want to donate to Amy Hedtke’s legal defense fund, click on the following link.

For more information, check out the article from The Hayride, at http://thehayride.com/2017/07/temporary-injunction-byron-cook[/caption