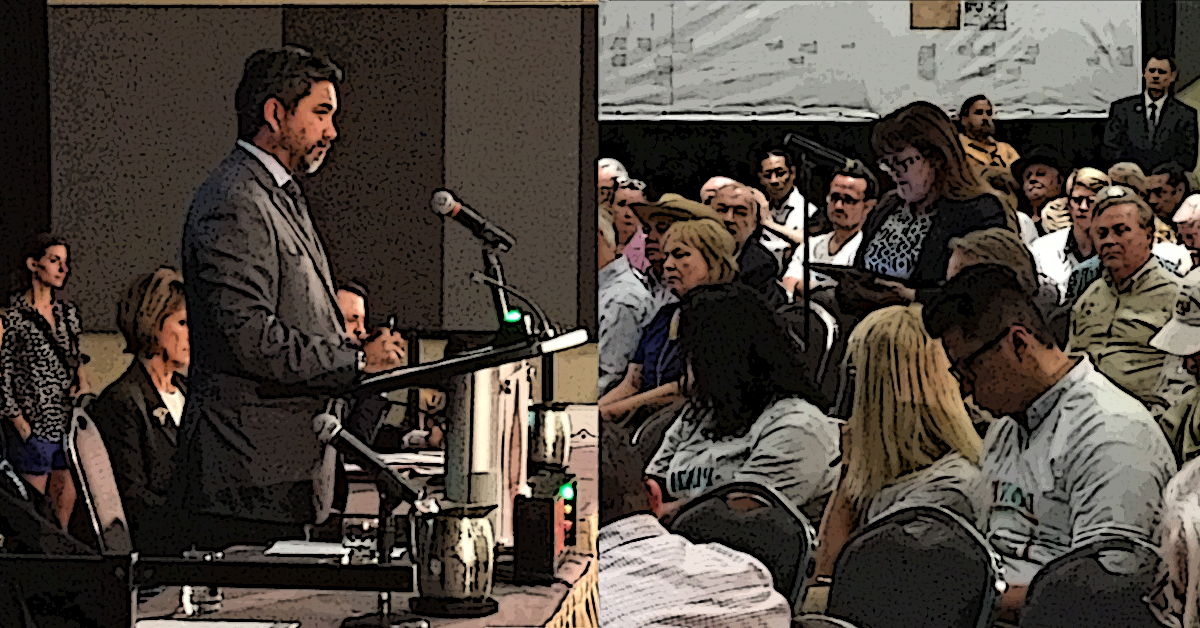 On Tuesday, May 2nd, at the Henry B. Gonzalez Convention Center, the General Land Office (GLO), the Alamo Endowment, and the City of San Antonio hosted an event to have a public discussion on the recently proposed changes, dubbed a “re-imagining,” to the Alamo and Alamo Plaza. Well, I’m not sure how they imagined their ideas would be received, but it sure was a hot time in the old town that night!

Let’s not tear up something historically significant to build something no one wants. – Event attendee

The event was presided over by San Antonio City Councilman Roberto C. Treviño, and consisted of a panel of archaeologists, designers, GLO and city officials, all of whom worked for the project in some capacity. After a brief presentation about the “master-plan,” in which they described the goals of the multi-year project (soon to face an upcoming May 11th vote by the city council on approving the master-plan and appropriating more city funds for the project), the event was then turned over to the audience for time-limited comments. 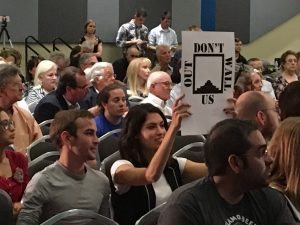 For the next three hours, the panel listened to a wide swath of citizenry as they voiced their almost universal contempt for the project.

It was a slaughter. It was almost as if the panel was putting on their own little Alamo pageant, with themselves cast in the role of the outnumbered and doomed defenders. Whether they were left-wing, right-wing, advocates for native rights, advocates for family burial rights, those who thought the Tejano story was being under-represented, people concerned with a state-takeover of the Alamo, citizens opposed to the removal of the Cenotaph, people fighting the removal of the shade trees, patriots that wanted to make sure the Texas Revolution and slain defenders were honored, people urging continued civic access to the Alamo, advocates for financial transparency, opponents of closing Alamo and Crockett streets to traffic, opponents to the roof-top restaurant, the families of Alamo defenders, the families of Alamo constructors, Alamo re-enactors, and neo-Mexican political revolutionaries, almost all were united in their impassioned loathing for the proposed re-imagining. Though their reasons for opposition differed, they made common cause against this project, a moment that is in itself unique: government creating great unity among the usually divided governed!

[We need an] Authentic restoration. Plexi-glass walls don’t do it! – Event attendee

I would like to note, however, that during this airing of grievance the panel was very patient and composed, never vocally condescending, even during especially heated points where they were accused of treason and criminal wrong-doing in developing the 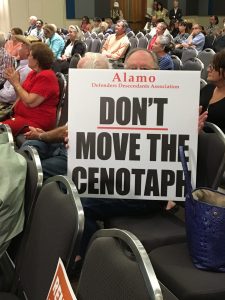 master-plan. Additionally, it is arguable that some of the proposed changes weren’t all that bad. Certainly, returning “reverence and dignity to the site,” pursuing archaeological exploration of the grounds, and the further preservation of the existing structures all seem worthwhile pursuits. However, one huge issue remains, the one by which all the worthwhile ideas must be balanced: money. How much will the tax-payers be expected to pay for someone else’s vision?

The new Alamo project, when all is said and done, is supposed to clock in at $400 million. To give you a sense of scale, the Alamo Dome was constructed for $186 million in 1993. Yes, there are a lot of other considerations with a site as important as the Alamo that a modern construction wouldn’t have, but some of this smacks of government over-spending the people’s money. And even though there are points of universal consensus, such as preserving the Alamo chapel, and despite reassurance from the panel that nothing was set in stone, one got the feeling from the parsed words of the panel that this thing was going through, very much as is. One speaker even compared it to the very unpopular San Antonio streetcar debacle, where it seemed the position of the politicians was that, “You’re getting your streetcar, and you’ll like it!” Concerning the master-plan, sure, there might be minor concessions here and there, but it was evident that this giant project was moving forward; scaling back the project to a less controversial and less expensive mission of restoration and re-staffing was out of the question. The masterplan, no matter how unpopular, was going ahead.

In all my research, I never found anywhere, where Travis said, ‘We need to man the cannon on the plexi-glass wall! – Event attendee 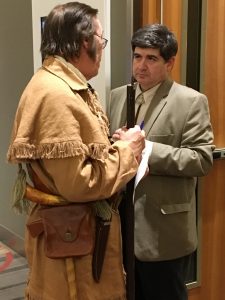 A re-enactor and advocate discuss the situation.

Among its most reviled features, other than removing the beautiful commemorative Cenotaph, was the creation of a plastic wall to mark the perimeter of the original fortifications. Though no one openly expressed issue with an archaeological exposing and display of the original wall’s foundations, not a single person expressed support for a plexi-glass ghost-wall being erected that, in addition to restricting free-access to the Alamo and possibly being dangerous in mass-shooting scenario, seemed tacky and out of place. In fact, the plans seemed reminiscent of the anachronistic glass dome erected on the Reichstag in Germany. One speaker put it best about the plexi-glass wall, saying “Everything is bigger in Texas, even terrariums!”

In regard to complaints about the project, Councilman Treviño said, “We hear you and are listening.” Yet, it remains to be seen if in listening, they’ll make significant changes, or will they instead hear, reject, and then proceed as planned, saying, “Those rubes will like it when it’s done.” Is the focus of this project truly to preserve and honor the Alamo, or is it just another vanity project of politicians, eager to write their name on somebody else’s legacy and grave? Only time will tell. Certainly, this will not be the last story written on this topic over the next few years.

In closing, I’d like to highlight a few quotes that captured the palpable spirit of opposition that came from the people that night, presented here without further comment.

“How dare you remove the Cenotaph!”

“What is [an archaeological dig] going to tell us that we don’t already know?”

“Blood was shed on these lands!”

“The noble intent of HR Bill 2968 has been corrupted into a stylish, Danish, Modern Theme-park! To paraphrase Mr. Red McCombs, ‘Shame on you!’”

“With [the Alamo] re-imagined, I doubt we’ll see a mention of the battle at all. The Greeks fought a tyrant. Travis and his men fought a dictator. And what do we, those here assembled, what do we fight? We decendents, historians, authors, archaeologists, re-enactors, sons and daughters, concerned Texans, they are all here. All of Texas is here against this. Those that love the Alamo across the world are against this. For us, not a tyrant or dictator, [but] worse: a group of multi-millionaires and political opportunists are trying to decide the future of the Alamo story.”